Mnemosyne is the Titan of Memory and mother of muses, she is permanently unvoiced 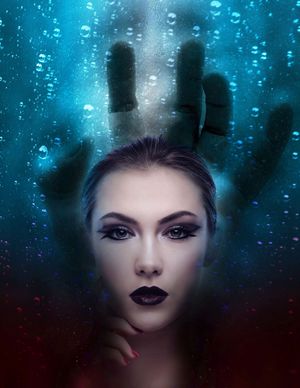 Siblings: The 12 Titans (Oceanus, Coeus, Crius, Dione, Hyperion, Iapetus, Theia, Rhea, Themis, Phoebe, Tethys, and Kronus), and Moxie who is her half sister through Gaia.

Spouse: She was married to Zeus for a short period of time and never remarried.

Mnemosyne does not have a job.

General Overview: Mnemosyne is the Titan of memory. She was once married to Zeus and together they birthed The Nine Muses. Throughout the years, Mnemosyne was very protective of her children. She often meddled her way into her children’s lives to try and control them. With Clio, she did not approve of her relationship with Eros. To prevent them from being together, she trapped Clio away in a dagger for centuries. Clio broke out from the dagger, her soul transferring into a mortal and she became Psyche. Once Mnemosyne learned that her daughter was the newly named Goddess Psyche, she stole her away, took Clio’s daughter, Hedone, and erased all memories of her past life. Now, Mnemosyne is locked away in Tartarus from the Titan Break Out. She was locked away by her daughter Clio and Clio’s husband Eros.

Dislikes: When her children don’t listen to her, messes, loud noises, and the ability to not control certain circumstances.

The Green Monster. Mnemosyne is extremely jealous. She is jealous of Hera who married the man she loved and will take it out on her children. If her children are happy in a relationship she will make them feel bad about it and plant seeds of doubt in their mind about their partners intensions.

Helicopter Parent. When it comes to her children, she wants to control every aspect of their lives to ensure they have the future she wants for them. She will do anything to make sure they stay within the visions she has for them.

Immortality. is technically immortal. Immune to the effects of aging, cannot die by any conventional means, and is immune to all known mortal diseases and infections.

Memory Wipe. Mnemosyne has the ability to erase memories. When using this ability, she must be looking the being in the eye for it to work. Her eyes turn milky white when using this ability. When erasing memories for gods, it will take immense power from her depending how much she takes.

Find and Replace. Mnemosyne is able to replace memories in someone's mind with fake memories.

Normal Daily Wear: During the day, Mnemsoyne will wear business casual outfit. As of right now, she is wearing a simple black dress while locked away in Tartarus.

Alternate Wear: When going out, Mnemosyne will wear extremely expensive black or dark blue dresses. She enjoys shopping in the high end stores.

MNEMOSYNE was the Titan goddess of memory and remembrance and the inventress of language and words.

As a Titan daughter of Ouranos (Uranus, Heaven), Mnemosyne was also a goddess of time. She represented the rote memorisation required to preserve the stories of history and the sagas of myth before the introduction of writing. In this role she was the mother of the Mousai (Muses) who were originally patron goddesses of poets of the oral tradition.

Finally Mnemosyne was a minor oracular goddess like her sister-Titanesses. She presided over the underground oracle of Trophonios (Trophonius) in Boiotia (Boeotia).

The Titanis (Titaness) Mnemosyne was sometimes named as one of three Elder Mousai (Muses), who preceded the nine daughters of Zeus as goddesses of music.[1]