Hyperion is the Titan of Light, he is currently scribed by DeRicki Johnson. 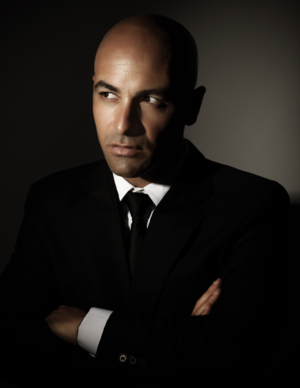 Distinguishing Features: A lean and muscular, fit 40-something, with dark, seemingly black irises that create an intense, intimidating stare and a complexion that might peg him as Mediterranean or Middle Eastern.

Newly released from Tartarus, Hyperion is a rising rap star, intent on building a media empire encompassing entertainment, news, social media and marketing. The initial seed money for his legitimate business endeavors came from his night job as an “off the books” procurer of rare and valuable items. Hyperion’s abilities are useful as a professional thief, but he finds this activity distasteful and it’s only something he turns to when in dire straits.

Hyperion’s Olympus abode is floor 42 in the complex—the rehab section. On Earth he maintains modest, but tasteful apartments in New York, L.A. and Dallas. His attire and material possessions are just ostentatious enough to engender respect in the industry, but not so expensive as to adversely impact his reinvestment of almost all his income back into his projects.

General Overview: Hyperion has been paroled from Tartarus by Zeus. Once considered the most powerful of all Titans, his powers have been significantly diminished by two phenomenon; one is a power downgrade as a condition of his parole and rehabilitation, and the other is that waning human belief in, and attention on the gods has reduced all of the god’s powers to some degree.

Deity Nicknames: DJ Hype is his stage name, Hyperion Solis is on his U.S. passport and legal documents

Likes: The acquisition and use of knowledge, and the study of humanity’s evolution are favorite endeavors. The manipulation of humanity’s rise is another interest. The creation and use of communications—especially of music and theatrics—in the pursuit of those first two interests is a final major area of attention.

Dislikes: Narcissists, bullies, sociopaths and sycophants are Hyperion’s least favorite people. Other dislikes include overcast days, and the pollution of the Earth—which he considers disrespect of his mother, Gaia.

Empathy For Humans. As far as most of the other gods’ are concerned, Hyperion goes a little overboard with his affection for, and interest in humanity. Some of them view with the same pity or disdain felt for “crazy cat ladies.” He will go out of his way to minimize collateral damage when using his powers, something other gods could potentially manipulate if they came head to head with him.

Electronic Interference. Electronic reproduction reduces his ability to “Discern,” because the sheer amount of electromagnetic impulses taking place at the time. However, this weakness does not apply to hearing, only to optic nerves.

Unhackables. Some beings are impervious to Hyperion's powers without explanation, whether its the way the light is processed through their brain, or their electro-magnetic impulses are miswired, i.e. Synesthia. This also includes other gods who have a certain amount of light manipulation power, such as Helios and Apollo.

Half-Way House. As a condition of his release, Hyperion is forbidden from using his Discerning on any other gods.

Discerning. As the Titan of Light, Hyperion can see electromagnetic impulses, in anything, including the ones that take place from the brain to the brain stem. Even through neurons firing, over the years, Hyperion has translated these impulses to the point where he can predict their thoughts based on their electromagnetic impulses. He is also able to manipulate these impulses when close enough to his target for a limited amount of time. Controlling individuals movements, even their own thoughts, via their optic nerve, though it is physically wearing on him and requires intense focus. The Subject's eyes must be open and remain open so Hyperion can manipulate light into it and gain control. He refers to this as Reading and Writing.

Transmogrification. Hyperion, like all gods, has the power to shape-shift, but prefers to use Discernment to appear as anyone or anything to almost anyone. This power is even possible, though greatly diminished, in electronic reproduction—a situation where he’d most likely expend the much greater necessary effort to endure the hassle of actually shape-shifting.

Perception. All sight is made up of the perception of light through our eyes, Hyperion has the ability to change and redirect that light to show someone anything he wants, even appearing to give the impression of time passing when none has.

Normal Daily Wear: Basic black, whether casual, business casual or formal wear. Hyperion’s clothes, though tastefully tailored and subtly expensive, are a blank slate designed to fade into the background when he is Reading and Writing.

The Eye Of Ra. A crystal ball gifted to him by his wife Theia, the Titaness of Sight, that allows Hyperion to “look in” on anyone he’s ever read is the only artifact Hyperion owns. All artifacts previously owned by him were confiscated upon his imprisonment, and not returned upon his release. He stole the Eye after his release. He’s also on the lookout for any of the other gods in possession of his former toys. If they’re playing with is stuff, he’s going to be pissed

Hyperion was the Titan of heavenly light, a watcher, and the father of the dawn, sun, and moon. His estranged wife is Theia, Titaness of the aether. Hyperion stood alongside the other Titans in helping Kronos overthrow their father, Uranus, making him one of the pillars that holds the sky in place.[1]

Belief and attention are power. When a gazelle realizes a lion has singled it out from the herd, that moment is one of ultimate power for the lion. In an instant, both of them know the lion holds power of life and death for the gazelle. The gazelle’s total attention and very future shrinks to encompass that single moment. In that moment, the lion is god.

As Tupac famously demanded from the stage, “All Eyes On Me!” If the gods are to ever wield great power again, we must harvest the power of human belief.

After my long imprisonment, I’m eager to change the power quotient more in favor of the gods. I think Zeus senses my potential for making this happen. Probably why that sly fox let me out of jail.