Helios is the Titan of the Sun, he is currently voiced by Connor Irving. 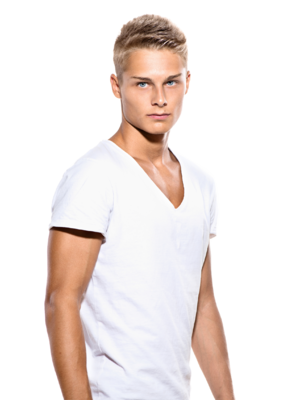 Before returning to Earth, Helios knew that the complaints of mortals would irritate him, but he also knew he had a good ability to listen and help others with their issues. So, Helios decided he would become a counsellor, for if he had to listen to mortals complain, he might as well get paid for it.

Before Zeus commanded the gods return to the mortal world, Helios lived in a palace of obsidian and onyx by the river Okeanos- a gift from his cousin Okeanos for marrying his daughter Perseis. Now back in the mortal world, he has taken up residence in his allocated floor in the God complex HQ.

General Overview: Helios is the Titan of the Sun, and the guardian of oaths. He is a widely unemotional god; however, he does carry a deep-seated rage. Helios is not fond of mortals and so the idea of having to be surrounded by them all day, everyday disgusts him and he is angry towards Zeus for making his decree. The Titan of the sun despises thinking about the past and does his best to ignore it, even when it comes back to bite him.

Likes: The sun and anything warm. His own company. Some members of his family.

Dislikes: Anything cold. Thinking about past mistakes. Being compared to/confused with Apollo.

Arrogance. Helios always likes to believe he is correct in all matters; on Olympus he was the all-seeing sun and was in many ways omniscient; however, on Earth he cannot see and hear everything from the skies as he once could, yet he still refuses to accept he can be wrong.

Lack of most emotions. Helios has a stony face; it is not easy to tell what he is thinking or how he is feeling. Other than anger, Helios does not feel much, or at least not to an extreme. He is usually laid back- maybe a little too laid back- and seems very nonchalant about a lot of problems or issues being raised.

Temper. Despite his lack of emotion, Helios has a very bad tempter. It takes a lot to get him angry but when someone does his rage can last a lifetime.

Immortality. is technically immortal. Immune to the effects of aging, cannot die by any conventional means, and is immune to all known mortal diseases and infections.

Heliokinesis. Helios draws power from the sun, at his most powerful and in direct sunlight, helios can channel the sun’s energy into a focused beam which can melt most beings, even immortals. However, channeling the sun’s power leaves Helios burned out for several days after.

Illusion. All sunlight is what makes up sight, with his power over sunlight, Helios can craft powerful illusions, so realistic that most would never even know. However, he needs to be in sunlight to perform this and is unable to do so in the dark.

Normal Daily Wear: Very formal attire and always either black or white with some form of gold detailing.

Alternate Wear: Helios will begrudgingly wear whatever is required of him, however he draws the line at tracksuits.

The Sun Chariot. Helios has a golden chariot adorned at the edges with wings; using this and his four white steeds- Aethon, Pyrois, Phlegon and Eous- he was able to pull the sun across the world creating daylight for mortals.

Golden Helmet. Helios owned a golden helmet made of sun beams often described as the shining aureole of the sun crowning his head.

HELIOS (Helius) was the Titan god of the sun, a guardian of oaths, and the god of sight. He dwelt in a golden palace in the River Okeanos (Oceanus) at the far ends of the earth from which he emerged each dawn, crowned with the aureole of the sun, driving a chariot drawn by four winged steeds. When he reached the the land of the Hesperides in the far West he descended into a golden cup which bore him through the northern streams of Okeanos back to his rising place in the East.

Once his son Phaethon tried to drive the chariot of the sun, but he lost control and set the earth ablaze. Zeus struck the boy down with a thunderbolt.

Helios was depicted as a handsome, usually beardless, man clothed in purple robes and crowned with the shining aureole of the sun. His sun-chariot was drawn by four, sometimes winged, steeds.

Helios was identified with several other gods of fire and light such as Hephaistos (Hephaestus) and light-bringing Phoibos Apollon (Phoebus Apollo).[1]

The all shining, the all-seeing, Sol, Ra, Helios. I have been known by many names, but no matter what title I have been given, or what epithet has been used to describe me, my role has always been the same. Each day my steeds pull my chariot and I from the east to the west, dragging the sun behind us and giving daylight to all insufferable mortals- a thankless task.

Now, I have to go down to the mortal plain at the command of Zeus; something I am not best pleased about. I have upset many beings on earth in my time and I do not want to have to face my past.