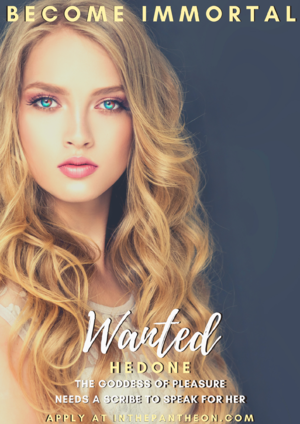 Eyes: A kaleidoscope rainbow of colors, identical to her mother’s.

Distinguishing Features: A pair of large wings a cross between her mother and father’s wings. Hers are feathered, but also iridescent, changing color based on her mood.

Siblings: Soon to be Older Sister

Currently resides on Floor 69 of the God Complex HQ with her mother and father.

General Overview: Hedone is the daughter of Eros and Psyche, or Clio, and the goddess of pleasure and enjoyment. As detailed in In the Pantheon, Hedone grew up outside of time and while two thousand years passed in this realm, Hedone only experienced eighteen. Growing up, Hedone believed she was being raised by her mother, Psyche, but was later revealed to have been several imps sent by Chronos, to force Eros to retrieve the Time Lord's staff. Hedone finally met her actual mother, Clio, when Eros, Dinlas and Thanatos took her from the cave and brought her to live with them at the God Complex HQ. As a result of her upbringing, her knowledge is very rudimentary, lacking the knowledge of reading and writing; however, Clio and Hedone work tirelessly to make up for this lack.

Likes: Reading, writing, music, specifically K-Pop, she is almost always wearing a pair of neon pink cat headphones, Din and Las, Duck and Goose, the animals have forfeited their original owners in favor of Hedone, flying with her father.

Dislikes: Her lack of knowledge and understanding of the world, she gets extremely frustrated when she doesn't understand something, cucumbers.

Inexperienced. Hedone grew up in a cave surrounded by imps who she believed to be her mother for her formative years, as such she has no formal education, something she hates. She works diligently to learn to read and write, but gets frustrated in overwhelming situations and can break down.

Blunt. In addition to her lack of education, is her never developing the social cues of others, and she often says what she thinks at that moment, without even thinking of the consequences.

MDMA. Hedone can sense and manipulate the pleasure, whether mental, spiritual, physical, social, sexual, etc., of people, animals and other creatures, whether by increasing, decreasing, causing or otherwise channeling emotions, even manifesting the emotional energy to physical level. Hedone is still exploring her powers and is very unfamiliar with them, and will get out of control when used.

Normal Daily Wear: She picks what is comfortable and relaxing, as she rarely leaves home, the few attempts she has made to understand fashion, have been with the help of Eros's assistant, Thea.

Alternative Wear: Hedone likes festival style outfits, bright colors and a lot of skin, much to her father's eternal chagrin.

HEDONE was the personified spirit (daimona) of pleasure and enjoyment. As the daughter of Eros (Love) she was more specifically the goddess of sensual pleasure.[1]