Dinlas is the god of hate and jealousy, scribed by Justin Brimhall. 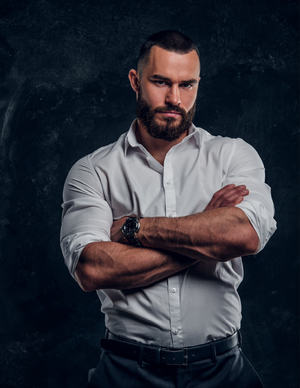 Head of Security for the God-Complex.

Residence is in the God Complex HQ on the 29th Floor.

General Overview: The God of Hate & Jealousy, he is the illegitimate son of Aphrodite and Ares, though he was tossed to Tartarus and raised by his Uncle, Hades, by Aphrodite with little explanation. He learned healing through his friend Asclepius when he was Guardian of Lamark, but was later ordered by Ares to destroy the city and kill all inhabitants, which he did. It was later revealed by Aphrodite to Eros, that Dinlas and Eros, were actually twins, as Hate and Love are often two sides of the same coin.

Seed of Jealousy. Dinlas feels like he is always in a competition with his brothers, Phobos and Deimos, specifically when around Ares, his father. If he cared about her opinion, this jealousy would likely spread to his twin Eros as he’s their mother’s favorite, but she’s a cold hearted bitch and he couldn’t care less about her opinion.

Seed of Hate. Dinlas refuses to have anything to do with his mother, Aphrodite, despite Eros’s many attempts to mend the bridge between them.

Damsels in Distress. This doesn’t just apply to young women. Dinlas cannot turn his back on anyone who’s in trouble. This gets him into trouble and fuels his seeds of jealousy and hate even more. He helps, even when he shouldn’t, and usually ends up exposing the hate and jealousy in others, pumping more conflict into his life.

Hate & Jealousy. Dinlas is able to foster feelings of hate and jealousy in others, even gods. Dinlas can feed off this energy, speeding up healing and powering up his other abilities. Though it can cause his own hate and jealousy to grow. Nothing can grow in a desert.

Student of Asclepius. Dinlas was once the Guardian of the city of Lamark, where wounded warriors were healed. There he learned healing from the master healer, Asclepius himself. Though Dinlas cannot heal disease, he can heal any wound received in battle, though to do so, he significantly drains his energy, and the worse the wound, sometimes will appear on his body.

Son of Ares. Dinlas has impeccable hand-eye coordination. When shooting he rarely, if ever, misses. That also applies to his ability to avoid damage. It carries over into everyday life in any sort of games or skills that require excellent hand-eye coordination. This is a side effect of being the son of war, Dinlas and Eros are by far the fastest of their siblings, though Dinlas is physically stronger than Eros, Eros has the ability to move at a blur. Their physical competitions could last for days.

Dinlas is the illegitimate son of Aphrodite and Ares, and twin brother to Eros, The God of Love. Aphrodite rejected him and cast him out of Olympus. Some say because he was the only male, god or mortal, that she seemed unable to manipulate, even as a child. Others say his hate and anger were simply too incompatible with her nature. He ended up in The Underworld where his Uncle Hades took pity on him and let him stay there. Dinlas grew up angry and alone. In time Hades realized the anger and hate in him so he sent him to the mortal world to be the Guardian of Lamark. Lamark was an ancient city where warriors would go to heal after battle. Dinlas grew to love the city and was close to Asclepius one of the chief healers.

When Ares, his father, discovered the city he was angry. He felt true warriors should die in battle. He went to Dinlas and tempted him with promises of riches and land if Dinlas would turn on the city. Dinlas was tempted and he went to Hades who let him take Cerberus back to Lamark. Between the two of them, they destroyed the city. As the city lay in ruins, Ares was pleased, Hades too, since he had received many souls. Ares then reneged on his promise to Dinlas. At that point, fear and dread ruled the lands and he turned over the spoils of war to his twins Phobos and Deimos. Dinlas had done the deed, killed all the people including his friend Asclepius, and was left with nothing. Dinlas the Guardian was dead, Dinlas the God of Hate was born.[1][2]

Welcome to my corner, my little piece of the pie located in the shadows with jealousy and hatred. Places a cigarette between his lips. Don’t pity me. I like it here. It helps me stay sharp. You see, I accept my flaws, in fact, I think they make me stronger than some of my counterparts. Most tend to ignore their weaknesses, only focus on their strengths, well that isn’t me at all. Ignites a match with his thumb and lights his cigarette.

My jealousy motivates me and my hatred fuels me. Smoke pours from his mouth. It took me a long time to understand that and even longer to accept it, but once I did, the world became my oyster. Recently, I decided to leave the giant shadow cast by my family to find myself. Now, I’m not saying I don’t know who I am. Of course I do. I’m Dinlas. Takes a long drag.

I just thought it was time for me to get out, stretch my legs a bit, and see what’s out there. I’ve been stuck around the people and things I hate so much for so long, it began to wear too heavily on my mind. My mind is too good of a thing to allow it go to waste. Pours whiskey into a glass.

You see, I have plans, I have visions of a better life, it’s not my fault nobody cares to listen. It angers me when my brothers get all the attention. Why should they get everything handed to them? I lived this way for more years than I can begin to count and decided rather than ask for the attention I deserve, I’ll put myself to work to induce action. Now, action is what gets results. Takes a drink with the cigarette positioned in the corner of his mouth. I plan to walk amongst the mortals. See all I can see. Experience all I can experience. My only regret is that my feelings of jealousy and hate will follow. They are my companions...my friends… my demons. Takes another drag, blowing the smoke from his nostrils.

Jealousy and hatred tend to bring out the worst in people when they’re around me. I feel them constantly and have learned how to live with them, but I fear others have not. When these emotions are felt, most bury their heads in the sand or turn a blind eye to what’s right in front of them. That only makes them more powerful.

If I am to be what I need to be for my father and what I need to be for me, then I must embark on this journey alone. I told nobody of my travels, but I know they will all learn of it sooner rather than later. For now, I will keep my head down until a clear path is opened up before me. I will know it when I see it. Until then, my companions and I will travel the roads less traveled on our way to victory.

I hope you all enjoy the ride. We certainly will. Smiles, takes the final drag of his cigarette, and flicks it forward.