Hebe is the goddess of youth and wife of Herakles, she is currently unvoiced. 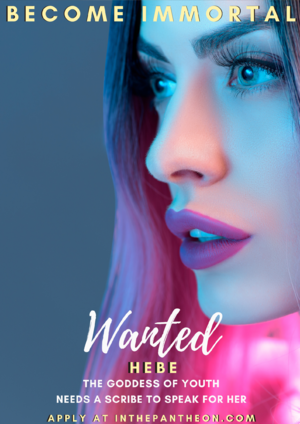 Hebe is the Executive Secretary for Zeus.

General Overview: Hebe was the former cupbearer for Zeus until she was replaced by Ganymede. During this time, she met her husband Herakles and got married to him. When Zeus built the God Complex, he asked his daughter to be his Executive Secretary. Hebe is also the Goddess who is responsible for blessing the Ambrosia made by Hestia, granting eternal youth. Without her blessing, Ambrosia will grant eternal youth, but they will still age.

Soft Hearted. Due to her youthful nature, Hebe cannot resist helping those who need assistance. Even if it gets her into trouble in the end.

Childish. Being the Goddess of Youth can have her acting like a child sometimes. She works hard to keep herself mature at work but when she gets home, she is able to be herself.

Eternal Youth. Hebe grants eternal youth to the gods, so long as she lives, the gods remain young as do immortals. She is one of the three necessary elements of becoming a deity

Normal Daily Wear: While at work, Hebe wears the finest designer outfits that money can buy. She takes most of her inspiration from the movie Devil’s Wears Prada. Almost always she's wearing an element of pink.

Alternative Wear: At home, Hebe will wear sweatpants and sweatshirts to relax.

Herakles (Heracles) received Hebe in marriage upon his ascension to Olympos, a wedding which reconciled the hero with Hebe's mother Hera.

In Greek vase painting Hebe was depicted either as the bride of Herakles, or the cupbearer of the gods, pouring ambrosia from a pitcher. Sometimes she had wings like the goddesses Iris and Nike.

Hebe's male counterpart was the boy Ganymedes and her opposite number was Geras (Old Age). She may have been equated with Selene's daughter Pandeia. Her Roman name was Juventas.[1]