Herakles is the god of strength, he is permanently unvoiced. 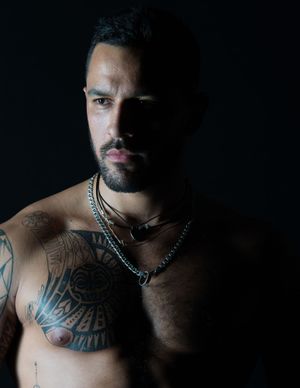 Distinguishing Features: He’s very muscular and has several tribal style tattoos that depict some of his better-known feats.

Siblings: Various half siblings from his father Zeus

Herakles is a stuntman for Hollywood.

Herakles lives with his wife Hebe a few blocks down from the God Complex.

General Overview: Herakles has always been hated by a majority of the gods other than his wife Hebe and his father Zeus. He looks up to Zeus and the two of them have a special bond that no one can break. This includes a secret handshake that is shared between the two of them.

Herakles avoids the rest of his family, focusing on his job as a stuntman. He prefers befriending mortals and telling them about his accomplishments of the past.

Dislikes: Losing, people who don’t know who he is, complicated conversations

Overconfident. Herakles believes he is one of the strongest that has ever lived. He will flaunt this fact and show off his abilities in a cocky way.

Blind Rage. In a fit of rage, Herakles will hurt anyone who crosses his path, be they friend or foe.

Super Strength. Herakles is one of the most physically strongest deities in the pantheon. He is able to lift objects that are 10x heavier then he is without breaking a sweat.

Natural Fortitude. Herakles can survive in anything, anywhere. Probably a result of Hera trying to kill him.

Normal Daily Wear: During the day, Herakles will wear ripped jeans and a white t-shirt.

Alternative Wear: When at the gym, Herakles will wear shorts and a tank top, which usually doesn’t stay on for long. He enjoys flaunting his muscles at the gym.

Nemean Lion Skin. A trophy from his first labor, the lion skin remains impervious to all human weapons creating a cape of invincibility around Herakles wherever it lays on his body.

The great hero of the Greeks who completed the twelve impossible Labours assigned him by King Eurystheus.