Eileithyia is the goddess of childbirth, she is currently unvoiced. 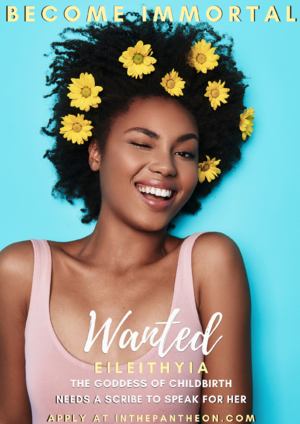 Eileithyia owns her own practice a couple miles from the GC, she moved locations after the Titans outbreak to insure that people could pop in and out of her office when time is of the essence.

Eileithyia lives on the 43th floor of the God Complex.

General Overview: Eileithyia functions as the OBGYN to immortals and mortals alike. She enjoys the idea of what each new life will bring, even though she has no children of her own. At the moment, she serves as Clio’s doctor for the twins, Eros constantly calls her for every little thing.

Consummate Professional. Eileithyia has trouble separating work from her life, everyone is a patient in her eyes, waiting to be fixed, she has trouble relating to things outside the medical sphere.

Alone. Eileithyia is always alone, and she almost prefers it that way, but she isolates herself from the outside world to the point of not being able to connect in even the simplest of ways.

Goddess of Childbirth. Eileithyia has all power regarding childbirth, she can lay her hand on an expecting mother’s stomach and sense problems with the child, and even help combat ill effects, such as stress.

Normal Daily Wear: During the day, Eileithyia wears scrubs, both comfy and practical for her job.

Doctors Bag. Long ago enchanted to always contain the tools that Eileithyia will need with the patient she’s visiting.

EILEITHYIA (Ilithyia) was the goddess of childbirth and labour pains. According to some there were two Eileithyiai (Eileithyiae)--one who furthered birth and one who protracted the labour. Her name means "she who comes to aid" or "relieve" from the Greek word elêluthyia. Her Roman counterpart was Lucina ("Light bringer") or Natio ("Birth").

When Alkmene (Alcmena) was in labour with Herakles (Heracles), Hera sent Eileithyia to stay the birth and so kill mother and child. However, Alkmene's handmaiden Galinthias spied the goddess seated before the door with her arms and legs crossed, and cried "a son is born." The goddess leapt up in surprise, releasing her magical grip on the womb, allowing the child to be born. Eileithyia was furious at being tricked by the woman and transformed Galinthias into a polecat.

Eileithyia was depicted as a woman wielding a torch, representing the burning pains of childbirth, or with her arms raised in the air to bring the child to the light. She was closely identified with the goddesses Hera and Artemis, both of whom bore epithets of her name.[1]