Enyo is the goddess of bloodshed, she is currently unvoiced. 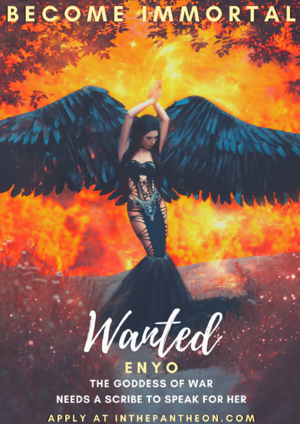 Distinguishing Features: Enyo has multiple scars all over her body but no one ever sees them since they are hidden by armor.

Independent Contractor and Consultant for the OA Defense and Military Companies.

Enyo lives on the 44th floor on the GC.

General Overview: Enyo has been a part of many wars throughout history. Now since wars have settled down, she spends her time working at the defense and military companies run by the OA to get her fill of war. She loves both of her parents dearly but doesn’t care about anyone else. Enyo is very focused on her job and works hard to improve herself everyday.

Enyo has one rule when it comes to war. “Never to hurt an innocent.” In the past, it has been hard to follow through with this rule all the time but she tries her hardest. When strategizing, Enyo believes that the best defense is a good offense.

Temper. Enyo has been known to lose her temper over the simplest things. When she is under a lot of stress, it is harder for her to control her temper.

Competitive to a Fault. Enyo loves a good competition which can sometimes lead her into trouble. She will often get herself into situations that seem impossible for her to get out of.

Super Strength. Enyo is stronger than many of the other immortals in the pantheon. She is able to lift things with ease that others will struggle with.

Battle Tactics. Being a War Goddess, Enyo has all the past battle tactics memorized in her mind. She will use them when needed in her job or other circumstances.

ENYO was the goddess or personified spirit (daimona) of war. She was the female counterpart and close companion of the god Ares Enyalios.

Enyo was closely identified with Eris, the goddess of strife. Indeed Homer does not appear to distinguish between the two goddesses. She was also connected with the Anatolian goddess Ma and the Roman Bellona.