Nike is the goddess of victory, scribed and voiced by Nikki Crump-Hansted. 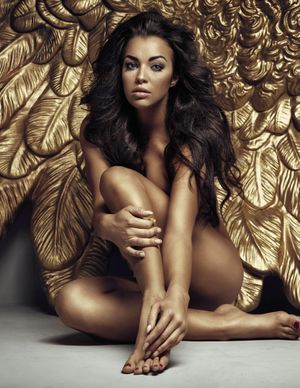 Eyes: Hazel to dark as night when angered. Whiteout when delivering a God message to the mortals. Ocean color extremely reflective; at other times, I am able to swim underwater because of these eyes

Distinguishing Features: Wings golden and or white. When I appear wingless, the wings are hidden by a tattoo on my back.

Laurel Trophy – Owner- a rebranding of the Trophy and Award industry – Main office in GC HQ, 16th floor. Stores around the world. I want people to covet desire to seek awards like high-end jewelry, created by the best for the best. “The mark of a True Champion”.

At the God Complex HQ.

General Overview: I am, at the heart of my day, fun-loving and carefree, as what do I have to worry about? I’m sweet and empathetic, and kind to deity and mortal alike. I believe in the unity of the family and I love them with my whole heart. I am also a fierce warrior in any fight and I value honor, valor, and bravery. I will never turn my back on a fight. My strength is my family and also my greatest weakness. I am a fierce protector. Mortals want to be around me because I’m a winner. I may be a bit naive when it comes to things of this new modern age of mortals, but I learn quickly. I have returned to you at my dad’s request to bring you new victories and to celebrate with you.

Dislikes: Hates to lose, the sulfur smell of the underworld.

Fool Me Once. Nike believes that everyone is as good-hearted and well-meaning as she is. As a result, it is easy to take advantage of her. And taking advantage of a goddess who holds victory in her hands is a highly desirable thing. Nike manipulated by the intentions of a less than ethical person is the very definition of rigging the game. If Nike discovers she has been manipulated, her anger is severe. There will be no fool me twice.

Don’t Leave Me. Nike feels abandoned by her mother, Styx, who saved her from her abusive father, Pallas. Nike is close to her family and derives much of her identity from her place in their lives. The thought of being cast off Olympus or otherwise losing her family or her place in their lives terrifies her. She will do just about anything to keep from being alone. When triggered, she loses her confidence, and without confidence it is hard for her to tell where Victory should fall.

Two Steps Back, Three Steps Forward. Nike has dealt with a great deal of heartache over the centuries watching what men do to each other. Sometimes she has granted victory to the wrong side and had to watch the fallout from her bad choices. Nike became so focused on her duty that she stopped growing as a goddess, regressing into a younger-minded state. This sometimes makes things difficult for her emotionally, but she is determined for every two steps back she took, she will take three steps forward and emerge ahead and victorious.

On Golden Wings. Nike is a winged goddess that appears as a beautiful woman to mortals. Even in her mortal form, her wings are ever-present in the form of a detailed tattoo on her back. Nike can bestow her winged speed on a mortal for a brief duration of time to help them achieve victory, though Nike cannot use her wings herself while this blessing is being used.

The Gift of a Feather. Nike can pluck a feather from her wing to give to a mortal. This feather contains the essence of victory and acts like a good luck charm to help that mortal achieve what they need in a 24 hour period. As that period passes, the gold begins to fade until, at the end of the 24 hour period, the holder is left with a snow white feather, symbolic of new beginnings. If someone has already achieved a victory and Nike wants to acknowledge it, Nike can gift the person with a gold pendant in the shape of one of her feathers. Nike will take one of her feathers to Hestia to smelt down and make these keepsakes for Nike to bestow to the worthy.

Victory Cry. Nike’s voice is a powerful weapon. Her war cry inspires those she has chosen to bless, allowing them to tap strength and endurance beyond the norm (like the stories of the mother that lifts a car off her child). Only the person this is intended for can hear Nike’s cry. This ability siphons some of Nike’s strength into the mortal and drains Nike, causing Nike to have to recharge before using it again.

Normal Daily Wear: On most days I can be seen wearing jeans and a t-shirt with various logos or sayings on them or sweatshirts and on other days workout attire is so comfy too. I love coats and jackets, especially my puffy gold one. With a pair of winged sandals or Nike running shoes.

Golden key. This allows her to drive any vehicle.

Weapons. Twin short blades and the long golden hilted blade – to mortals they appear as trinkets on her keychain.

Cars. Midnight blue Maserati Ghibli SQ4, Oceanus is his name. Nike may drive anything in the Olympus fleet.

Nike and her siblings were close companions of Zeus, the dominant deity of the Greek pantheon. According to classical (later) myth, Styx brought them to Zeus when the god was assembling allies for the Titanomachy against the older deities. Nike assumed the role of the divine charioteer, a role in which she often is portrayed in Classical Greek art. Nike flew around battlefields rewarding the victors with glory and fame, symbolized by a wreath of laurel leaves (bay leaves).

“And Styx the daughter of Okeanos (Oceanus) was joined to Pallas and bare Zelos (Emulation) and trim-ankled Nike (Victory) in the house. Also, she brought forth Kratos (Cratus, Strength) and Bia (Force), wonderful children. These have no house apart from Zeus, nor any dwelling nor path except that wherein God leads them, but they dwell always with Zeus the loud-thunderer. For so did Styx the deathless daughter of Okeanos plan on that day when the Olympian Lightener called all the deathless gods to great Olympos (Olympus) and said that whosoever of the gods would fight with him against the Titanes (Titans), he would not cast him out from his rights, but each should have the office which he had before amongst the deathless gods. And he declared that he who was without office and rights as is just. So deathless Styx came first to Olympos with her children through the wit of her dear father. And Zeus honored her, and gave her very great gifts, for her, he appointed to be the great oath of the gods, and her children to live with him always. And as he promised, so he performed fully unto them all.”[1][2][3]

‘Tis thine in battle to confer the crown,

the victor’s prize, the mark of sweet renown;

For thou rulest all things, Nike divine!

And glorious strife, and joyful shouts are thine.

with sparkling eyes, elated with success;

May deeds illustrious thy protection claim,

and find, led on by thee, immortal fame!

Hey mortals, what’s up? I’m the Goddess Nike. You know me, right? Well, on Mount Olympus, they call me the Little One, cause I’m one of the youngest of the Goddesses, but after a few millennia, I’ve learned a lot from the “Old Ones”. In a whispering voice, “Please don’t tell them I said that. My name is recognizable, right? I mean, but you know I’m so much more than just an athletic shoe and much more than a hood ornament on a luxury car or a statue you’ve seen in Athens.”

“You see, I’m the ‘ROAR’ of the crowd at a sporting event. I think my favorite is the one you call football. Why are there two sports with the same name? (I Googled it) There’s soccer: the rush when the Latin announcer shouts ‘GOOOOAL!! GOOOOAL!!’ Or the American one when the announcer shouts ‘Touchdown!!! And…the crowd…goes…wild…AAHHHHHHHH,’ at the end of the Super Bowl. Amazing, right? Well, that’s me. THE WINGED GODDESS OF VICTORY!!! I’m the ‘WHOO WAAAH’ of your military. Oooo…Oooo…Oooo…wait…wait…and my all-time favorite is in French, ‘VICTOIRE! VICTORIE! VICTORIE!’ Little did they know they were chanting my name. Teehee, I get all giggly when I hear it.

Okay, okay, so why am I telling you all of this? Well, Zeus said: he wants us Gods and Goddesses to walk among you in “visible” form, hence my image above, and that we need to get a job. I’ve always protected my dad and delivered his messages of great importance. I used to proclaim champions. I used to proclaim war victors too, but here in this new era of WAR, all I can do is shake my head and shrug IDK (love these shortcuts).

Hey, can I tell you a secret? I’m the one that they send in with the “HUSH MONEY” to keep “paternity” issues from my Lady Hera. Believe me, that is very difficult.

So now what do I do? What “Victories” need to be acknowledged? Things are different now. I miss my athletic champions. I am looking forward to the Olympics, that is for sure. The games I created in honor of my father, Zeus.

My friends suggested that I go to work at Starbucks because they are always hiring and I have an addiction to hot drinks.

There was a knock at my door I looked up…Kratos, my older brother, is standing in my doorway “What?” I asked as I stopped typing.

“Little one, come now.” He tried to rush me. “You’ll be late,” he said to me. “Hurry and finish that.” He was standing there, holding my coat, awaiting me to come with him.

I turned back to my laptop my other brother Hephestus gave me. “Okay, you guys, I gotta go. Let me know what you think about my job choice. I don’t know why I can’t just work at the office (trust fund kid and all). I mean, I’ve been Dad’s driver and his personal bodyguard for like ever. So, I don’t know why I need a job with the mortals. I am the daughter of Zeus, well foster daughter. I better go, wish me luck today…heading to boil some coffee beans and water.

Thanks for checking out my page. Chat soon!

Your friend Nike the Winged Goddess