Kratos is the god of strength, he is permanently unvoiced. 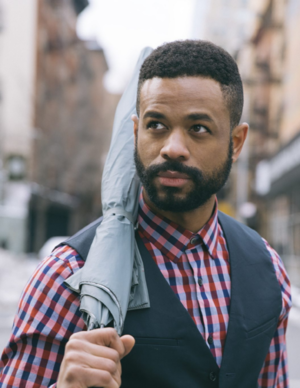 Kratos works as general security in the GC HQ.

Kratos lives on the 16th floor in the God Complex HQ.

General Overview: Kratos is a quiet god, who tends to keep to himself other than his siblings. He spends most of his time watching over Zeus and when he is not doing that he is spending time with his musical instruments or working out at the gym.

Deity Nicknames: K. Only Nike calls him that and he dislikes it.

Hidden Emotions. Kratos buries how he truly feels under a thick wall. He believes that since he is the God of Strength, he needs to be emotionally strong which leads him to close off his true emotions.

Perfectionist. Routines are very important for Kratos. If his routine is broken, Kratos will become very frustrated and will be thrown off for the rest of the day.

Super Strength. Kratos is stronger than what is naturally possible for the gods. The only gods who are physically stronger are: Hercules, Atlas, and Zeus

Strength Manipulation. Kratos is able to grant strength to another immortal/mortal for a short period of time.

Normal Daily Wear: During the day, Kratos wears a comfortable t-shirt and black jeans. He prefers to wear darker colours.

Alternative Wear: Kratos loves wearing suits. He will wear them for a night out or when he is working on the job.

KRATOS (Cratus) was the god or personified spirit (daimon) of strength, might, power and sovereign rule. He and his three siblings--Nike (Victory), Bia (Force) and Zelos (Rivalry)--were the winged enforcers of the god Zeus, angel-like beings who stood in attendance of the heavenly throne.