Greece’s highest and most majestic mountain, Olympus, is a world in itself with 52 distinct peaks and deep gorges. The shape of Mount Olympus, the versatile and varied charm of its nature, its high peaks, full of fog and low clouds that often bring storms, caused awe and admiration to the ancient settlers who lived in its foothills. There is much to discover even if you don’t make it to the summit: gentle paths, hidden corners, towering trees, unique wildflowers and wild rocks, below and above the clouds sprawl across nearly 500 square kilometers.

The mountain is located in the Olympus Range on the border between Thessaly and Macedonia, between the regional units of Pieria and Larissa, about 80 km (50 mi) southwest from Thessaloniki.

The highest peak, named Mytikas, rises to 2,918 meters (9,573 ft) above sea level. Only birds (and planes) fly higher than Mytikas, the highest of Olympus’ peaks. It was the legendary center of the Greek Pantheon, their meeting point, where the theater of stormy debates unfolded.

It and the other slightly lower summits – Skolio, Stefani, Skala and Prophitis Ilias – that make up this massive range are often veiled in clouds. But when they part, there is no more dazzling sight than these dramatic natural spires boldly outlined against the deep blue firmament.

After all, one of the meanings of the word Olympos has, since Homer’s days, been ‘shining’. The shining palace of the gods of Ancient Greece, “Olympus was not shaken by winds nor ever wet with rain, nor did snow fall upon it, but the air is outspread clear and cloudless, and over it hovered a radiant whiteness.” (Odyssey, VI, 41) The various Olympian deities resided in the alpine ravines which were described as "mysterious folds" by Homer.

Near Mytikas, the peak named Stefani shaped like a wreath as its name implies, was where Zeus sat enthroned. This peak is the most impressive and steep peak of Mount Olympus rising sharply for 200 meters where it reaches a final height of 2,902 meters (8,900 ft) above sea level. 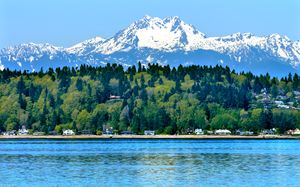 At the base of Stefani, the Muses' Plateau sprawls outward before beginning its descent further into the alpine valleys. The plateau sits at 2,550 meters (8,370 ft).

1913 - The summit of Olympus was reached for the first time by a mortal on 2 August 1913 by the Swiss climbers Frédéric Boissonnas and Daniel Baud-Bovy, who were assisted by a mountain guide called Christos Kakkalos.

Fortunately for these mortals, the deities had long abandoned their homes and were not around to smite them on sight.

The intent was "the preservation in perpetuity of the natural environment of the region, i.e. of wild flora, fauna and natural landscape, as well as its cultural and other values."

June 2016 - Mortals construct the Olympus National Park Information Center in the foothills of Olympus, near the city of Litochoro, and begin guiding hiking tours deeper into the Olympian territory.

April 2019 - The Olympian god, Zeus, reclaims the entire area of Olympus and decrees the area be divided into three sections of approximately equal size (150 square kilometers). These sections are the God Complex, City of Olympus, and Mount Olympus National Park.

On the west and southwest, two additional sections are left undeveloped/undesignated at this time.

Late April 2019 - The deities descend from their homes and begin the arduous task of reintegrating with the mortals, rebuilding the power of the Pantheon, and bringing a new Golden Era to the world. This includes the building of the God Complex HQ within the confines of the God Complex.