Difference between revisions of "Hestia"

Hestia is the Goddess of Hearth & Home, currently voiced by Georgia Moody. 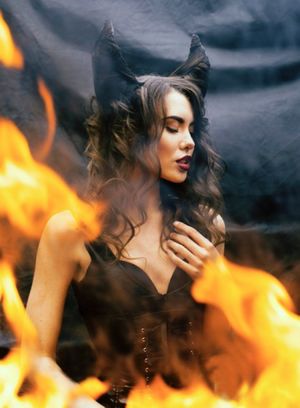 Eyes: Golden brown, molten gold when in Olympian form or when angry

Spouse: None. Her current consort is a member of the Satyroi named Connor. She will not marry but is devoted to her consort.

Hestia owns/operates Hearthfire Catering, specializing in the highest of high end, gourmet, ethically sourced foods and drinks. She works with her Satyroi to acquire fresh venison, wild game birds, and fish from Scotland and the edges of the Scandanavian countries.

General Overview: Hestia is a loving person who embodies the “do no harm but take no shit” mentality. She does not tolerate fools but is intensely loyal and protective of people that she has chosen as worthy of her affection. She is almost feral at times, having spent all the time since the fall of Olympus among the Satyroi and Celtic peoples – she claims to know gods of other pantheons that didn’t suffer the fate of Olympus and frequently speaks her mind with no regard to the opinion of others. She was the firstborn of Kronus and Rhea and will not tolerate disrespect.

Likes: Food, drink, music, dancing, gossip, sporting competitions if done outside, spending time in the forest with the Satyroi and the Olympians that she has found worthy. She also has a guilty pleasure of yelling at TV cooking shows.

Dislikes: Hestia gets along with pretty much anybody, but she can’t stand fools, social climbers, or people who needlessly kill animals or disrespect the home. See Running with the Park Part II re: her attitude about poachers/trespassers.

Babble-speak. Hestia can communicate in all languages and dialects.

Hearth Goddess. Hestia is flame-proof and cannot be burned.

Limited Shapeshifting. Hestia has her mortal form and her Olympian forms only.

Pyrokinesis. Hestia can manipulate flame and fire without being burned. She can also control fires, even not of her own creation. She also has control over molten substances provided they have been heated by some variety of thermal method.

Elixir of Immortality. Hestia holds the recipe to make the ambrosia that can turn a mortal into an immortal. It takes time, and cannot be sped up. She does not keep it made and can only make it when she is in residence on Olympus.

Normal Daily Wear: Hestia dresses pretty casually, usually in browns or greens. She does love the modern invention of “jeans”. She is also a fan of very long skirts, usually brushing the tops of her feet. In the summer, she usually wears a lightweight cotton or linen veil over her hair to keep the sun off if she is outdoors for long. In winter, she tends to favor cloaks and an arisaid, which is a large (~ 4 feet square) plaid wool scarf in greens and browns and cream. She frequently pulls it over her head to protect herself from rain/snow. She only wears natural fibers for her daily clothing. She doesn’t wear much jewelry, but what she does wear is good quality but simple/elegant in design.

Alternate Dress Wear: When she is at home, it’s a loose dress and no shoes. If you see her in her kitchen, she is always cooking barefoot.

Knives: Hestia carries a leather knife roll. She can always pull whatever knife she needs out of it, from something to fillet a fish to something to use as a thrown weapon. This knife roll has a minor glamour on it that allows it to appear as a regular leather purse with nothing untoward about it if examined by mortals (airport security, etc.).

“Flint & Tinder”: A means of making fire. This has ranged from a sparking tool to matches to modern cigarette lighters. Currently carrying a butane-powered mini-torch with her old cult symbol engraved on it.

“Pinch of Magic”: A small, ornate object that looks like a lady’s powder compact. Hestia can open this compact and find whatever spice she wants within.

“Hestia, in the high dwellings of all, both deathless gods and men who walk on earth, you have gained an everlasting abode and highest honour: glorious is your portion and your right. For without you mortals hold no banquet, ― where one does not duly pour sweet wine in offering to Hestia both first and last.” Homer, Hymn to Hestia

Home. Whether a building of stones and mortar, or a house built of daydreams and visions in the lands of Morpheus, we all have a home, and I am the guardian of that sacred place.

I stay here on Olympus and attend to the important things – the things mortals crave in their heart of hearts – while my brothers and nephews go around banging anything they can hold down and my sisters and nieces plot vengeance. You won’t find many statues or artworks of me, because I’m not one to go appear to artists in a flash of inspiration.

Courted by Apollo and Poseidon, I chose instead to be my own person, to look after those who need looking after – not that I will ever refuse cheerful companionship, or turn aside those in need of comfort and reassurance, with a bonus if someone is wise enough to come bearing gifts in the form of food or coffee. Divine knows that my brothers and sisters need someone around the place with common sense. Not even Zeus himself will force my hand, lest I depart from his halls and leave Olympus cold and empty.

When a sailor is out on Poseidon’s briny deeps, he is praying to go home. When a soldier is out at war with Ares, they are praying to go home, to their hearth and families. You know those scenes in the movies, where someone pulls up outside their family residence on the Winter Solstice (or whatever they are calling it, these days), when they see the warm light on the snow and smell their mother’s mulled wine, waiting to be greeted by Odysseus’ loyal hounds? That’s where I live. I’m the lover’s embrace after a long trip, the bone-deep reassurance that as long as you are home, nothing can go wrong.

When the gods need a place to rest, they come to me. Always Hestia to the rescue, to be the voice of reason to Hera, the one who can scold Zeus, the one who offers comfort to the world-weary and takes no shit from anyone.

I am home, I am the hearth, I am Hestia.