Hades is the God of the Underworld, currently unscribed, voiced by Michael Beckett. 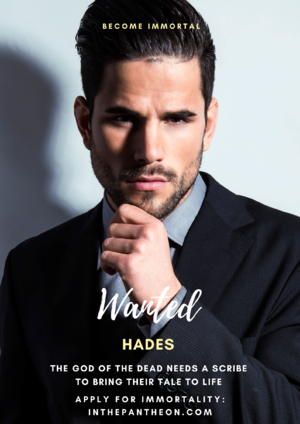 CEO of the Underworld Consortium

The Underworld, currently located in the sub-basements of the God Complex HQ, God Complex, Greece

General Overview: Hades is the god of the dead, not to be confused with Thanatos who is the god of death, Hades rules over all that live in the Underworld. After the conclusion of the Titanomachy, Poseidon, Zeus and Hades drew lots to divide the world between them. Poseidon and Hades let their youngest brother, Zeus pick first, as a sign of respect for the role he played in freeing them from their father, Kronos. Zeus drew the first lot, and became ruler of the skies and king of the gods. Poseidon drew next, as the oldest brother, and took the seas, becoming ruler of the deep and king of Atlantis. Hades drew last and took the Underworld, where he rules as king. Within the confines of the Underworld, Hades is supreme, outside it, not so much.

Administrator. Hades will, at times and regardless of consequence, do only what is right for the Underworld. Whether that be deciding who stay and goes, deals to be made, assets to be gained, he sometimes finds it impossible to separate who he is from what he does.

Shapeshifting. Hades appears to mortals and immortals alike as a 6’5” caucasian male, well-built but discreet about it. As one of the Three Kings who share this ability, he can take the shape and appearance of any human or animal he wishes.

Enthralling. Hades has always been charismatic. Mortals can resist everything except for Death, and of that, Hades is King. While Hades can use his aura to sway mortals and even immortals to be open to his suggestions, it’s his eyes that can captivate, holding another in thrall until he looks away or there is a distraction. While Hades holds his target in thrall, he can deliver verbal commands - more like extremely persuasive suggestions - that they will be compelled to obey. For mortals, these commands may be anything, as mortals cannot resist death. For immortals, these commands must align with that immortal’s own nature, as contradictory suggestions will be rejected as intrusive. The command holds until it is obeyed, releasing the energy. Mortals do not remember how they came to the actions they have taken, however, immortals may.

Dark Summons. Everyone comes to Hades eventually, and they always come when called. Hades has a business to run and has grown accustomed to not having to wait for things to just fall in his lap. Drawing on the power of his realm and his own charismatic nature, Hades has delved into the art of summoning - the wayward dead, other supernatural entities, elementals of earth and fire key to his realm - for the purposes of getting the job done, whatever that job is. No one keeps the King of the Underworld waiting. He’s made sure of it. The combination of his said charismatic nature and his collecting and studying of ancient tomes has allowed him this ability.

Good To Be King. Hades is the god of luxury and wealth. Having dominion over precious metals and ores of the Earth, Hades has supreme wealth and can have whatever he damn well pleases. From actual business transactions to the simple conjurings of pleasurable things, Hades ensures that he and his guests enjoy the best of what the Underworld has to offer.

Normal Daily Wear: Generally wears a sharp designer suit; colors vary on his mood and circumstances. When he goes out on his bike, he decks himself out in riding leathers, matching leather jacket, and a black skull bandana.

HAIDES (Hades) was the king of the underworld and god of the dead. He presided over funeral rites and defended the right of the dead to due burial. Haides was also the god of the hidden wealth of the earth, from the fertile soil with nourished the seed-grain, to the mined wealth of gold, silver and other metals.

Haides was devoured by Kronos (Cronus) as soon as he was born, along with four of his siblings. Zeus later caused the Titan to disgorge them, and together they drove the Titan gods from heaven and locked them away in the pit of Tartaros. When the three victorious brothers then drew lots for the division of the cosmos, Haides received the third portion, the dark dismal realm of the underworld, as his domain.

Haides desired a bride and petitioned his brother Zeus to grant him one of his daughters. The god offered him Persephone, the daughter of Demeter. However, knowing that the goddess would resist the marriage, he assented to the forceful abduction of the girl. When Demeter learned of this, she was furious and caused a great dearth to fall upon the earth until her daughter was returned. Zeus was forced to concede lest mankind perish, and the girl was fetched forth from the underworld. However, since she had tasted of the pomegranate seed, she was forced to return to him for a portion of each year.

Haides was depicted as a dark-bearded, regal god. He was depicted as either Aidoneus, enthroned in the underworld, holding a bird-tipped sceptre, or as Plouton (Pluton), the giver of wealth, pouring fertility from a cornucopia. The Romans named him Dis, or Pluto, the Latin form of his Greek title Plouton, "the Lord of Riches."[1]