From In the Pantheon
Revision as of 13:21, 2 May 2020 by ErostheAmor (talk | contribs) (→‎Skills / Abilities)
(diff) ← Older revision | Latest revision (diff) | Newer revision → (diff)
Jump to navigation Jump to search

Demeter is the goddess of the harvest, and is currently unvoiced. 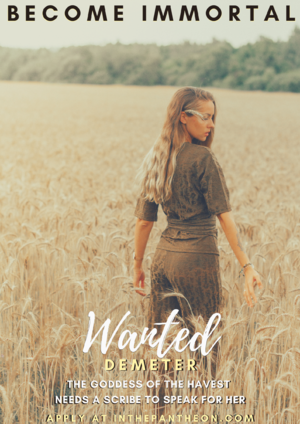 Hair Color: The color of an autumn wheat field, long tresses pulled back into a soft braid

Attorney to the Gods of Olympus

Most times she resides at her apartment on the 11th floor of the OA building, but keeps a small cottage on the island of Crete.

General Overview: Demeter is the eternal mother. She loves her babies, dotes on those closest to her and is always ready to bake you a pie. Demeter believes her daughter, Persephone, to be innocence personified. When it comes to her precious baby, she’ll do whatever has to be done in order to ‘protect’ her. She holds animosity toward Hades for stealing her beautiful child. She also knows she must give Hades the respect due him as an Olympian. But sometimes a mommy’s gotta do some shady things to keep her baby safe.

Demeter is just a little country girl. She loves the sound of wind in the wheat fields and the smell of rain in the air. Why, she’d just as leave sit on the porch and have a glass of tea with you. She prefers the company of mortals over gods, as mortals live a more humble way of life. She also has an eye for a hard-working, sweaty man toiling in the fields.

She’s agreed to take on the job of becoming the Attorney to the Gods. As her brethren seek their way into the 21st century, she looks to ancient writings to find a way to merge the two into one.

Feast or Famine. As Goddess of Grain and the Harvest, she’s worshiped for giving the gift of growing your own to mankind. Demeter holds the power to give society abundance in their harvest or keep the fields barren for years, leaving entire populations to starve.

Persuasion. As the Goddess of Sacred law, she’s a shrewd negotiator. She knows that though sacred laws cannot be broken, they can be bent to fit any scenario. She has the ability to convince both mortal and god alike, to see her side of an argument.

Limited Shapeshifting. Because she’s spent so many years among the mortals, she feels more comfortable in their form. When among the gods, she wears her immortality with pride.

Normal Daily Wear: Demeter is known for her classic fashion. She prefers earth tones to flashy garb. She’s a classy lady, opting for the natural look.

Lighted Compact – Demeter has a torch that is always lit. A reminder of the months spent searching for her missing daughter. As a way to keep her eternally-lit torch with her, she carries a lighted compact. Though it looks like a typical mirrored compact, the light will shine like a beacon even in the darkest places.

SALAD – SAcred LAw Database. An extensive archival system with access to every law, both mortal and divine, known to have ever existed.

Demeter is the 2nd born child of the Titans, Cronos and Rhea. She is the Goddess of the Harvest and Grain, Sacred Law and Fertility of the Earth. She has the power to feed the world or starve them into submission. She is the mother of Persephone, abducted wife of Hades. Each winter, she mourns the loss of her child to the Underworld.[1]

Hello, my sweet little mortals. Isn’t it a beautiful day? I’m just so happy to be here with all of you again.

I’ve been summoned by our illustrious leader, Zeus. (Or as I like to call him, Baby Brother). He thinks it’s time we all come back and fix the wrongs you mortals have done over the years. The truth is, I’ve never left your side. I’m always here to ensure the fields are plowed, the seed is sown and the cycle of life continues. If only I could keep my precious baby from having to descend to “the spa” three months out of the year.

I’ve agreed to this little PR campaign because I feel more comfortable around you mortals. I love the feel of the earth beneath my feet. I crave the smell of the air after a rainstorm. And I enjoy watching the sweat roll of the backs of all those hard-working men in the fields. Earth Mommy likes.

Zeus did say, that in order for this to work, we gods must get jobs. What? I get that we deities don’t fit in the way we used to, but a job? Come on, Baby Brother. I, for one, will NOT be working for anyone else, especially a mortal. No offense, my sweet babies, but it is what it is.

My first thought was to open up a diner. You know, one of those little places with lacy curtains and checkered table-cloths. But seems Baby Brother had other ideas. As Goddess of Sacred Law, it’s my duty to ensure that everyone, gods and mortals alike, adhere to the rules of the cosmos. And though they cannot be broken, rules can always be bent. I have agreed to take on the position of OA Legal Counsel. I’m sure as my brethren find their way back into the mortal world, there’ll be a few messes for me to clean up.

I’ve also heard rumors that my younger sister, Hera, wasn’t exactly happy about my coming on board. After all, Zeus was once my husband too. However, the only good thing that came out of that union was my sweet baby girl, Persephone. So don’t worry, Little Sister, that booger-eating mama’s boy is all yours.

So come along, my sweet little mortals. You all look hungry and like any good mother, I need to get you something to eat. Here, let me pour the wine. Wait, where’s my wine. I just had a bottle…Damn it Dionysis, bring me back my bottle!!!