Persephone is Goddess of the Spring and Queen of the Underworld, currently voiced by Ember Savage. 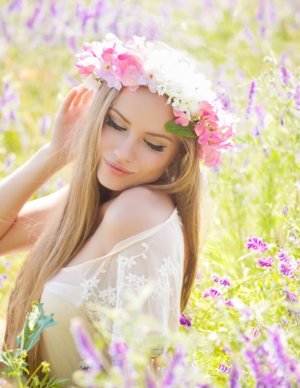 Hair Color: Wheaten blond in spring and summer, Faded to almost silver blond in fall and winter. Worn long and flowing, No specific style each day, Persephone likes to change up her hair depending on her mood.

Eyes: Blue in the summer to a faded grey silver in the Underworld.

Distinguishing Features: No specific feature, mostly her historical beauty makes her stand out from the crowd.Many references to her Beautiful Ankles

Life Coach, owner and operator of Transitonem, life coach for the living and recently living. Locations within the God Complex headquarters and secondary office in the Underworld.

God Complex Headquarters, God Complex, Greece. on Floor 12 during the Spring and Summer, and in the winter and fall, in the Underworld, Residence in the Apartments.

General Overview: Young at heart, and full of life, Persephone is the maiden of spring, bringing forth the bloom of flowers each year. When she is sad, which has happened more often lately, she pulls flowers and vines into being to cheer herself. She is looking to change up her life now that her Marriage is past, and she has a chance to make her own decisions for once. As Iron Queen, Persephone rules as Partner and co-regent to Hades, meeting out punishment or mercy as needed, everyone deserves a second chance in her view.

Persephone looks for the good in everyone and everything, sometimes to her own detriment. Her views are constantly evolving as she is breaking out from the shadowed and sheltered life she has lived up until now. While many of the immortals endeavored to exist amongst the mortals or adapt, Persephone dwelt in a semi existence going back and forth as she had for millennia, so this puts her behind on a lot of modern adaptations with small pieces of consciousness to rely on.

Likes: Pomegranate anything. It’s a stereotype but sometimes you just go with it.

Dislikes: betrayals, attacks against her family and home, loneliness and losing her temper.

Momma’s Daughter. Persephone was extremely sheltered by her mother and, as a result, sometimes suffers from a bit of naïvité and lack of self-confidence.

Generous to a Fault. Persephone will give anyone anything they need at any time, often without thinking of her own needs or wants.

Rose-Colored Glasses. Persephone sees everyone as their best self, whether that best self is actualized or not. Sometimes this puts her at cross-purposes with those who are more realistic or pessimistic. It doesn’t deter her, but puts her at great risk if that faith turns out to be misplaced,

Lightweight. Persephone cannot hold her liquor. Unless it’s in a glass.

Goddess Of Spring. As the Embodiment of Spring, Persephone is a fertility goddess. She has powers over the growth of plants, and the aspects of spring including weather, the fertility of animals. With her Return from the Underworld, she brings spring back to the mortal realm, and begins the rebirth of the world.

Spring Growth. Persephone can make plants grow and bloom just by force of will. In the aspect of the Goddess of Rebirth, she can also overtake structures to reclaim them for the wilds. She can also accelerate the growth to the natural passing of time and make barred land fertile again.

Spring Storms. As the embodiment of Spring, Persephone’s role does necessitate the storms of spring, the “waters of the tears” of man. These storms can be calm and nurturing, or they can be full of anger and destruction. When the wrathful storms rage, Persephone has little control over their destructive force and is physically depleted afterwards. For this reason, Persephone is very careful to keep her temper well in hand.

Rebirth. Persephone can revive flowers with a touch or a wave as her dual role of Goddess of Spring and Queen of the Underworld. In times past, she has even brought a chosen few souls back from the Dead while enthroned in the Underworld.

Queen’s Pardon. As the Queen of the Underworld, Persephone takes every Curse of Man heard, bottles and stores it until the mortal passes. When the Soul is judged, she will submit all evidence at their trial, she knows their heart is in the right or wrong place. In this role, Persephone gets the last word before the souls final sentencing. Providing Justice within the court of the Underworld.

Normal Daily Wear: Persephone is embracing her new life, within the Mortal realm, she dresses as her whims take her. If going out, she dresses up, if enjoying the day or relaxing she tends more to flowing styles. There is almost always some reference to flowers and skulls in her garb. Her Style tends to a Bohemian style. For Jewelry Persephone wears a simple locket in gold around her neck otherwise her hands are unadorned. In the spring and summer she usually wears a crown, hair band or combs of flowers. Very often Persephone is seen without shoes.

Persephone was the daughter of Zeus and His sister goddess Demeter. Goddess of Spring, Growth and Queen of the Underworld as the wife of Hades. When in the meadow picking flowers, Kore (Persephone) was taken by Hades and carried off to the Underworld to be his bride. Her mother, Demeter fell into a great sadness, and during this time as she searched the world for her missing daughter, the weather changed, crops failed and mortals suffered. During this search she was accompanied by the Goddess Hekate, and advised by the Titan god of the Sun Helios.

When Demeter learned of the Abduction, she demanded the return of her daughter, and would not allow the world to bear fruit until she was returned. Zeus relented, but because Persephone had eaten of the fruit of the underworld, the Pomegranate, she was bound to the Underworld. Thus the compromise was born, during the Spring and Summer, Persephone returned to the mortal world with her mother, the world blooming and becoming fruitful. Conversely when she returned to the Underworld, plants began to die and wither, and fall and winter arrive.

This story made her, even with the ancients, the symbol of vegetation which shoots forth in spring, and the power of which withdraws into the earth at other seasons of the year.

Though known for the Abduction of Persephone and the references to the wife of Hades, Persephone is also known for her wrath, as recounted in the story of Minthe.

“Minthe, who according to myth, became the concubine of Haides, was trampled under foot by Kore (Persephone) and was transformed into Garden Mint, the plant which some call Hedyosmos” – Strabo, Geography 8.3 14 (Trans. Jones) (Greek geographer C1st B.C. to C1st A.D.)[1]

You have heard my story retold countless times over the eons, new names, places and centuries but it is still my story. You might have dug deeper into the stories and myths and read more, or you might just know it in passing. But that only scratches the surface of who I am.

Who I really am is very complicated. I don’t fit into either niche they want to place me in. On one side I am the daughter of Demeter, that is always included when they tell my story, I am loved and doted on by momma, but protected and sheltered too. But not many stories tell you about my father, Zeus. Mighty king of the gods. things can be pretty awkward when he sends down his missives from the high chair on Olympus.

They called me Sweet and innocent growing from child to maiden,that’s a drawback to being so sheltered. I played in the meadows and nymphs were my best friends, as you mortals would say. What’s the new term? Squad Goals?

Anyways, thinking I was untouchable was my undoing, having no knowledge of the events that transpired around me was my downfall. I had not a care in the world until the ground opened beneath me and the next thing I knew I was in the dark of the Underworld. Men have always had that “if you want it, take it” mentality, it’s nothing new to this era.

So that’s how I found myself in the arms of Hades. God of the underworld, and Dear old dad’s brother. So, like I said, my life can be Complicated. Mother is also Hades sister, so double uncle as you mortals would call it. that is enough convoluted ties of a family tree. Things were strange back then, hard to explain to your modern sensibilities. I made my own mistakes too. I knew I shouldn’t eat the food of the Underworld, but I was so hungry. A few seeds wouldn’t hurt right?? Well I didn’t know if the wonderful deal Zeus and Hades had struck. I was hungry and sad, and the food was there.

Those few seeds were enough. Queen of the Underworld and Wife of Hades part of the year, Maiden of spring the other and in the world of sunlight the other.. At least Father was able enough to calm Mother down. You would not believe how hard it was for mortals when Momma was unhappy. .

But that’s who I was, the life so many centuries ago, almost lost to obscurity. Now, Father says it’s time for us to become relevant again. To make ourselves known in the world, to find a way to impact your mortal lives. Now i am going to reinvent myself. We have all been in hiding, our relevance whispers of scholars and historians. Before you ask, yes. I am still married to Hades, but our marriage is businesslike at best, At least we can be cordial when I see him again.

As for mother, I hope this new wave of organic, back to the earth sustainable lifestyle makes Demeter happy. I couldn’t help but smile thinking about the joy this new wave of earthy children had to be bringing Mother. Though they didn’t use her name, their gardens and backyard farming were their own rituals of praise to her and for her to be getting the recognition she deserves makes me proud to be her daughter.

And Zeus. Well, you have seen a lot of what he is up to already, no need for me to recap what you already know HE has a reputation that precedes him.

For me, it’s time to delve into this new world, find my new path and walk it. Find a way to use this new world to bring relevance to us and benefits to you. I can say that I am intrigued by everything I have seen! Could use more flowers and meadows, but snow is melting and spring is here. This is the time of new beginnings. New life.

But remember, mortal friends, my life is a cautionary tale. I saved you from the gory details but I am sure you can read between the lines. Be careful with your new endeavors before the world swallows you whole.

That gives me an idea for a new job, I will have to see what Zeus thinks of it.