Prometheus is the Titan of Forethought and creator of mankind, scribed by D.M. White, voiced by Dean O'Sullivan. 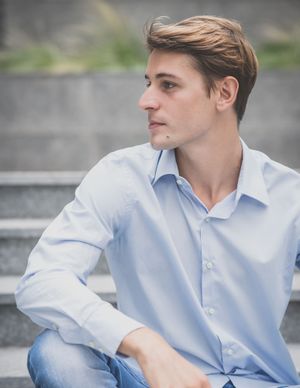 Master Craftsman. Prometheus is a master craftsman. As the god who bridged the knowledge of the gods and brought them down to man, Prometheus is highly knowledgeable in the fields of science and technology and capable of crafting things by hand the way mortals do, at a much higher level. He has the ability to pass on this knowledge, often helping spur small leaps in technology and science, though sometimes he fails to consider that just because something can be accomplished does not mean it should be accomplished. A few thousand years chained to a rock has made him far more cautious about this.

Golem Maker. Prometheus has the ability to shape clay and animate it, similar to the way he once shaped early man. Man has long since evolved and souls are more complicated and regulated things now, but Prometheus can still create the raw flesh form of a being and give it life, compelling it to perform simple tasks for him as needed. The golems have a limited life span because they are made of clay. As they are damaged, they disintegrate, requiring Prometheus to make new ones as needed.

First Flame. Prometheus kept a single spark of the original fire he stole from Zeus and gave to mankind. He hid this spark deep inside his mind while chained to the rock and, since being released from his punishment, has tended it ever since. He can carry this spark to other mortals, giving them a sudden flash of inspiration to solve problems, especially leaps in understanding in the realm of science and technology. As such, he continues to pass the light of illumination to this day, albeit, with more care and less catastrophe. Prometheus can kindle a spark in his hand from this retained fire, though he is careful not to do so around other immortals because he was supposed to not have it anymore. What they don’t know...

Foresight. Prometheus has the ability to step inside the mind of a mortal and view all the choices available to that mortal, but with greater farseeing ability than the mortal themselves. He can see the ripples of choices made and paths taken to a limited degree into the future. Though he himself cannot influence or make those choices for the mortal, he can always guide the mortal through counsel, encouraging them to certain paths and not others.