Difference between revisions of "Nyx" 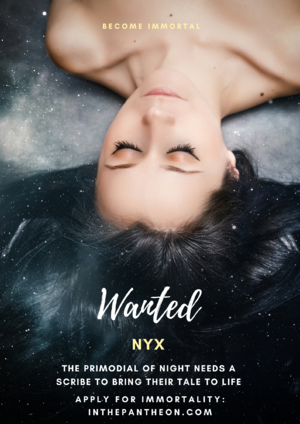 Nyx is the Primordial Goddess of Night, she is currently unscribed.

Apartments in Tartarus; the 17th floors inside the Headquarters of the God Complex.

General Overview: Nyx is the primordial of night and first born of Chaos.

Nicknames: Nyxie (Only Eros is allowed to call her such, do so at your own risk)

All In The Family. While her love for her family is quite strong, it is also her weakest point. Nyx has a much higher chance of acting irrationally if it involves her family, or those she cares for.

A Mother’s Love. Nyx can hide away mortals and, when necessary, immortals, from other mortals and most immortals. This does not work against other Protogenois.

NYX was the goddess of the night, one of the primordial gods (protogenoi) who emerged as the dawn of creation.

She was a child of Khaos (Chaos, Air), and coupling with Erebos (Darkness) she produced Aither (Aether, Light) and Hemera (Day). Alone she spawned a brood of dark spirits including the three Fates, Sleep, Death, Strife and Pain.

Nyx was an ancient deity usually envisaged as the very substance of the night--a veil of dark mists drawn across the sky to obscure the light of Aither, the shining blue of the heavens. Her opposite number was Hemera (Day) who scattered the mists of night at dawn.

In ancient art Nyx was depicted as a either a winged goddess or charioteer, sometimes crowned with an aureole of dark mists.[1]