Hypnos is the primordial of sleep, and twin of Thanatos, he is currently unvoiced. 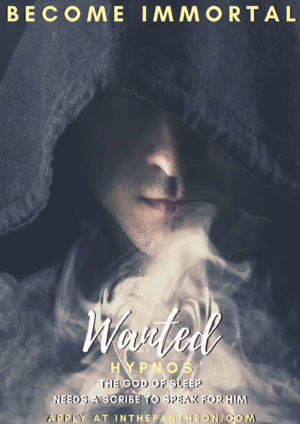 Hair Color: Straight brown, swept back from his forehead

Eyes: Black with gold flecks throughout

None at the moment is currently incarcerated in Tartarus for aiding the Titans. In an alternate Earth, he enslaved the entire world gods included and was the unquestioned ruler.

A coffin in Tartarus before in the alternate world the throne of Olympus.

General Overview: Hypnos is very charming and outgoing. He is a textbook extravert and needs to control things. He needs to be the center of attention to fuel his narcissistic tendencies. Hypnos is cunning and a master manipulator, even if he can’t get into your mind and control it. He is quick to study people and their habits as well as their weaknesses. With his high intelligence he knows which buttons to push and how to push them to get his desired results.

He is the oldest by five minutes and is Thanatos’ fraternal twin brother. He worked very closely with Thanatos and is connected with a twin sense until the post “End of World War Two”. Growing up, the pair were usually under the watchful eye of their older sister Nemesis or stirring up mischief with their best friends Dinlas and Hekate. After his marriage to Pasithea, she managed to tamper down some of these negative traits in him.

He went exploring alternate worlds. In one, he found a water source that amplified his abilities and he took over that world mortals and gods included. When Thanatos came across him they quarreled and in the end Thanatos imprisoned him. He was later freed by Chronos, the prime of time, and assisted in the Titans escape. He returned to our world to wreak his own brand of havoc and was once again stopped by Thanatos and Nemesis.

Likes: The word yes, being in charge, being in control, woman, sex, a good time, revenge, chess, sleepwalkers, Atë

Dislikes: Being told no, anyone who stands in his way or disagrees with him, his family, the gods, the titans

Hubris. Hypnos always believes he’s the smartest in the room, often to his detriment. This is especially true when it comes to his twin, Thanatos, who he often felt the need to shelter, but at the time believed he was better than.

Twin Bond. Hypnos cares for no one and nothing truly, the closest thing to emotion that he does feel is for his twin, Thanatos. Though Hypnos’s bond with Thanatos mainly shows itself as him telling Than what to do or forcing Than to do it.

Immortality. Technically immortal. Immune to the effects of aging, cannot die by any conventional means, and is immune to all known mortal diseases and infections. As a Deity, they are able to teleport, or "pop" anywhere in the mortal plane with a few exceptions, the God Floors of the GC HQ are mystically protected, so no teleporting to or in between them, anything on the non-mortal plane, i.e., the Underworld, Atlantis, and the Void, are non-accessible without a guide.

Sleep God. As the God of sleep, it was Hypnos’ job to help mortals fall asleep so they could rest or have them sleep so his brother Thanatos could claim them with ease. But due to his nature he would sometimes deprive the mortals of sleep as punishment for real or imagined slights against his character, for fun or he was instructed to do so by Zeus.

When he induces sleep on a mass scale his eyes become solid gold, as he builds up the energies to do this his hands begin to glow gold as well and with a clap, the sleeping energy spreads out looking like waves of sand.

Dreamscape. Hypnos can enter one’s dreams at his will and once in them he could guide and control them as he saw fit. He could give the mortals their greatest desire to inspire them to achieve things (the ones who pleased him) or drive them insane with horrific images causing the dreams to continue in their minds in the waking world or inducing a coma trapping them in a permanent nightmare

Hypnosis. The ability like his namesake allows him to take over mortals' minds in the waking world compelling them to carry out his will without question. In this state, the mortals are known as sleepwalkers. This is his most commonly used ability.

Alternate Wear: Winged Helm and the Cloak of Stars.

The Cloak of Stars. Similar to his twin’s cloak it was weaved by their mother Nyx only his cloak came from the dusk sky right before twilight with an ever-changing constellation pattern on in to match the stars for the time of the year. His cloak was to dazzle and glam the mortals who looked upon it putting their minds at ease making them easier to induce sleep. It also can shield him from the mortal’s view when the hood is worn.

Winged Helm. Hypnos is one of few wingless Primordials so to help him get around while assisting his brother Hermes bestowed on him on of his winged helms so he could fly like most Primordials.

Cosmic Dagger. His dagger’s blade is made from the same material as Thanatos’ scythe and can cut rifts open to travel to other locations and worlds.

Hypnos was depicted as a young man with wings on his shoulders or brow. His attributes included either a horn of sleep-inducing opium, a poppy-stem, a branch dripping water from the river Lethe (Forgetfulness), or an inverted torch. His Roman equivalent was Somnus or Sopor.