Lyssa is the primordial of rage, she is currently voiced by K.A. Miltmore. 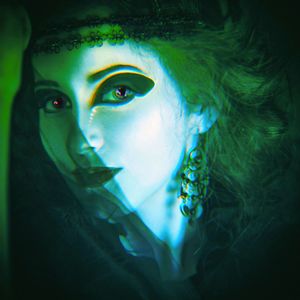 Distinguishing Features: Her mortal form has a small tattoo of a dog on the back of her neck.

Parents: Daughter of Nyx plus the blood of Ouranous

Fomenting rage and madness is her lifestyle brand, R+M, so she doesn’t work at anything else per se – just the social media posts and constant travel.

God Complex, but I am rarely there. There is too much to do out in the world.

General Overview: Lyssa speaks softly, blends in often in her mortal form, and that is how she prefers it. Her prime motivation is always to stir up rage because it feeds her strength and she finds beauty in the rage of others. She looks for opportunities to stir it up between mortals, in unsuspecting ways. She prefers visiting close knit, small towns right now where ideologies can clash.

Likes: Crows are her preferred messengers, but she has an affinity to animals, as she speaks their language. She has a preference for darkness, due to her mother’s influence, but she also loves being in crowded places, where she can watch for any cracks of conflict that she can exploit. She doesn’t have an interest in reading, but she does enjoy art galleries.

Dislikes: Top of the list is meddling mortals who thwart her plans. She also has recently developed an aversion to all bakery sweets.

Goddess of rage/madness. she has the power to overcome the normally rational minds of her victims, and let them express the rage that simmers below. Because of that, she can have heavy influence over most mortals when she is in proximity to them. Her eyes also have the ability to cause mortals to lose consciousness if she uses that ability on them. The darkness of her eyes draws them into a comatose like state that lasts for a brief time.

Lyssa appears in mortal form when she is at her usual strength. When she is wounded, she takes the form of spirit – a ragged, haggard and rather scary-looking dark spectre. In her goddess form, she’s a form fashioned from the darkness between stars and the glowing red platelets of her father’s blood. In her mortal form, humans might notice her long hair moving as if blown by the wind.

Rabies. Lyssa’s rather strange power is the ability to bring about rabies and other raving diseases in animals. It’s a weird quirk but it has come in handy.

Syncope. Lyssa can bring about a fainting spell on mortals with the darkness in her eyes.

Normal Daily Wear: She likes knee-high boots and long flowing jackets when in mortal form. She favors darker colors. She often wears a necklace or bracelet with a dog motif.

Alternative Dress Wear: In her goddess form, she really doesn’t need clothing. In her spirit form when she is not at full strength, her form looks like a ragged spectre – not her favorite fashion look.

Cell phone – she doesn’t like to speak to anyone, but she uses her wi-fi all the time. Social media is her weapon.

Charm bracelet – She has a bracelet that when she jangles it among mortals, it helps to set the stage for the conflict and anger she seeks. The origins of the charms are unknown at this time, but she does add to the collection from time to time

Lyssa personifies rage, madness, and rabies in animals in the ancient Greek and Roman world (known to Rome as Ira). She appears in two tales – one where she is sent by Dionysus to make the Minyades mad and the other where she causes rabies in the dogs that tear apart Acheron, the human who spied on Artemis bathing (Euripides). She is a daughter of Nyx, Goddess of Night, and the blood of Ouranous (Uranus) when he was castrated by Kronos.

She is closely aligned with other “dark” goddesses, such as the furies and the maniae. Despite being a primordial goddess, she is not as featured in myth as other Olympians, and there are other sister Goddesses who represent the insanity that she wields as a weapon. In another tale, Hera asks her to cause madness in Herakles, and at first, she is reluctant, but eventually, she does so – which causes him to kill his wife and children.

In ancient artistic representations, she is portrayed as having a small dog’s head perched on the crown of her own head, as a symbol of her ability to cause rabies. She is depicted in boots and a short skirt.[1][2]

You’d expect me to be easy to spot, what with the rage and madness right there on the surface. Like most first impressions, you’d be wrong. Don’t get me wrong, I can rail with the best of them. I’m not the daughter of Nyx for nothing, but bursting blood vessels isn’t my style. Madness, after all, takes many forms. My form is almost nonchalance; easy on the eyes and ears, reasonable and calm on the surface.

Times are interesting in my line of work, with rage being so easy to foment. Neighbor against neighbor has never been so easy, not since the late middle ages. It is so easy to divide humans these days: red against blue, man against woman, youth against age, rich against poor. So very easy to find the cracks and fill the spaces with rivulets of anger-fed conspiracies, splashing up against wounds that have never really healed. It almost makes the work less satisfying, really. Where is the challenge? One likes to feel that they have earned their daily manna, no?

So today, I am visiting little towns near big cities, crossroads where ideas clash and housing prices rise. A whispered word here, a conspiracy there, and everything just starts to spin toward my R+M brand. Everyone has a brand these days – Zeus, of course, has to be all big splash, Times Square billboard style. That works for him, I suppose. When does lightning ever go out of style, really. Other immortals choose a quieter look. If I were into that sort of thing, I would follow Pomona on Instagram. She has an interesting lifestyle blog, almost Martha Stewart meets Roman bacchanal. Athena is always pinning owls on Pinterest and frankly, it seems a little basic. We get it, owls are your thing, but come on, how many do we need to see? It’s a bit tedious, really. Social media, while certainly part of my bread and butter, is what has opened the door to hundreds of photos of perfect lattes, kittens playing peek-a-boo, filtered faces with puckered lips, and hashtags about everything and mostly nothing.

Once I have finished my current tour, I might take some R&R at Olympus, but honestly, it is a bit too much drama for me, with all the family cloistered together, pretending to get along.

I suppose I’ve rattled on long enough. I was feeling expressive; I might delete this later, I don’t know. Anyway, keep an ear out for me – you’ll see my work all around you, whether you want to or not. That is probably the best part of my job, really.