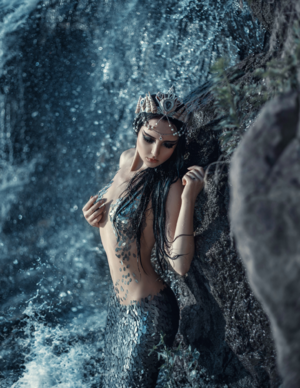 The first three Sirens were born from Akheloios and Melpomene. These nymphs had an attraction to the sea and spent most of their time there. All three fell in love with sailors who broke their hearts. They jumped off a cliff and into the ocean where Posiedon saved them all, turning them into mermaids. The sirens became their own section of mermaids, dedicated to singing sailors to death. Over the years, more girls have drowned themselves into the ocean. The sirens fine the broken hearted ones and turn them into Sirens by kissing their lips.

Physical Description. Sirens have two different forms, human and mermaid. In mermaid form, sirens have fins instead of legs and these can come in many different colours. They are not like the mermaids from Atlantis. Their colour of their tail has no meaning. When the Sirens are singing their song, their eyes glow to lure the men to their doom. Sirens can come to land but they must return to the water 24 hours after leaving.

Song of the Sirens. The sirens have naturally beautiful singing voices. Their songs are enchanted to lure the men and their ships towards rocks and shore.

Ability to Breathe Underwater. Sirens can breath above water and underwater. When breathing underwater, Sirens grow gills to help take the oxygen from the water for their blood.

THE SEIRENES (Sirens) were three monstrous sea-nymphs who lured sailors to their death with a bewitching song. They were formerly handmaidens of the goddess Persephone and when she was secretly abducted by Haides, Demeter gave them the bodies of birds to assist in the search. They eventually gave up and settled on the flowery island of Anthemoessa.

The Seirenes were encountered by the Argonauts who passed by unharmed with the help of the poet Orpheus who drowned out their music with song. Odysseus later sailed by, bound tightly to the mast, while his men blocked their ears with wax. The Seirenes were so distressed to see a man hear their song and still escape that they threw themselves into the sea and drowned.

The Seirenes were depicted as birds with either the heads or entire upper bodies of women. In mosaic art they were depicted with just bird legs.[1]