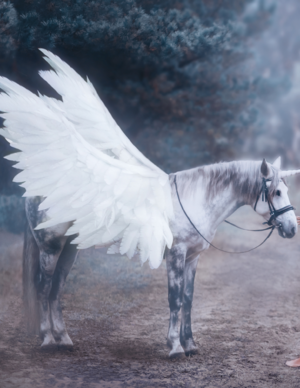 The first Pegasus was born from the neck of the beheaded Medusa. This Pegasus was tamed by a man named Bellerophon who fought against the Chimera. When the battle was over, the hero attempted to fly to Mount Olympus but Zeus commanded the flying horse to throw off its trainer. Zeus then promoted the horse to be his thunderbolt-bearer for the rest of his life. During this time, the Pegasus mated with regular horses which created more of them. The female Pegsi tend to stay in a herd while the males go off on their own. Pegasus can be trained and adopted by a God or demi-god. They are loyal to their owners but can be real jerks to those

Physical Description. The Pegasus has a body of a horse and large white wings which sprout from the middle of its back. There are a few different colours for Pegasus’s which include black, tan, and white.

Flying. Pegasus is able to fly using their wings.

PEGASOS (Pegasus) was an immortal, winged horse which sprang from the neck of the beheaded Gorgon Medousa (Medusa). It was tamed by Bellerophon who rode it into battle against the fire-breathing monster known as the Khimaira (Chimera). Later the hero attempted to fly to heaven but Zeus caused the horse to buck throwing him back down to earth in disgrace. Pegasos winged his way on to Olympos where he became the thunderbolt-bearer of Zeus.

Pegasos was commemorated amongst the stars as the constellation of the same name. Its rising marks the arrival of spring and, in Greece, of seasonal thunderstorms.

Pegasos' name means either "of the spring" from the Greek word pêgê, or "sprung forth" from the word pêgazô. The first alludes to the steed's connection with various springs, and the latter to its birth from the Gorgon's neck.[1]