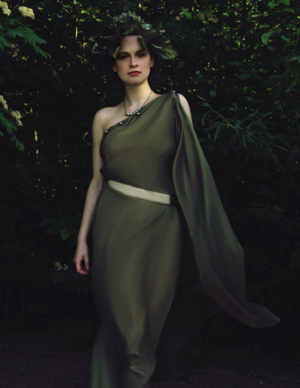 Nymphs are minor goddesses of nature. There are the Celestial Nymphs (Aurae, Asteriae, Nephele), the Land Nymphs (Alseides, Antoniades, Napaeae, Oreads), the Water Nymphs (Halie, Naiads, Oceanids), the Wood and Plant Nymphs, and the Underworld Nymphs (Cocytiae, Lampades, Orphne). They have a passion for nature and many of the nymphs who are left dedicate their life to help save different ecosystems around the world. A few of the other nymphs are companions to a certain god or goddess like the nymphs, Britomaria, Hyale, and Iphigenia are companions to Artemis. There are also a few nymphs who continue to work as nurses in the God Complex. They are there to assist if anything were to happen to the gods.

Physical Description. Nymphs are all different. In their goddess form, they have attributes of what their main element is. The land and wood plant nymphs have tree-like features and will have twigs sticking out from various body parts while the plant nymphs have more flowers growing on their body. The water nymphs will have water dripping from their bodies while in their goddess form. The Celestial nymphs will have constellations tattooed in their skin. The Underworld Nymphs usually have paler skin from the lack of sunlight.

Immortality. Technically immortal, does not age or sicken.

Elemental Manipulation. Nymphs will only have elemental manipulation with the elemental they are associated with. Their strength is dependent on how powerful they are.

NYMPHAI (Nymphs) were female spirits of the natural world--minor goddesses of the forests, rivers, springs, meadows, mountains and seas. They were the crafters of nature's wild beauty, from the growing of trees, flowers and shrubs, to the nurture of wild animals and birds, and the formation of grottos, springs, brooks and wetlands.

Nymphs were also companions of the gods. Dionysos had his wild-eyed Mainades (Maenads) and Bakkhai (Bacchae), Artemis was accompanied by a band of huntress nymphs, Hekate by the dark Lampades of the underworld, Poseidon by the Nereides, and the goddesses of Olympos by a bevy of nymph handmaidens.

Others were the nurses of the gods including the Idaian nymphs who nursed the infant Zeus, and the Nysian nymphs who cared for Dionysos.

The nymphs were depicted as beautiful young women with attributes matching their abode.[1]