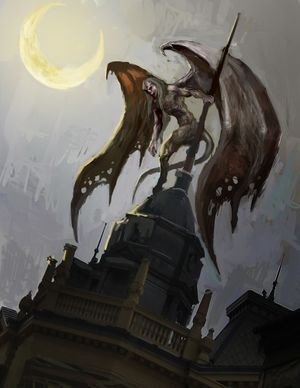 Slightly larger than a traditional gargoyle, they stand nearly 6 ft. (1.8m) when on their hind legs. They often appear smaller crouching in a position resembling a frog stance with their knees splayed.

Most have eyes appearing empty and lifeless, deeply inset in their gruesome faces. Some have eyes that shine golden in the light, similar to a reptile, or at times demonic red.

Typically, they have two horns that protrude from their head, just above the eyes. These horns range in size, but typically can be described as large. Often these horns have delicate patterns etched in them providing a variety of shapes, designs, swirls or other textures. Their hands and feet end in sharpened claws.

Their mouth is always open due to the size of their fang-like teeth which protrude prominently from their jaws. When they speak or screech, their long, slender and forked tongue flicks rapidly like a distressed snake. Although their speech sounds like senseless chittering, they have developed a very complex language known as Gargish.

Flying. Large spikes sit at the shoulder’s apex gradually merging into more flexible spines providing stability to their bat-like wings. These wings allow them proficiency at flying, diving, and aerial maneuver as though they were a vampire bat with the capability of achieving great speeds.

Stoneskin. While remaining still, the nightgoyle perpetuates the façade of a statue-like appearance. Their hides are rough and thick appearing to have been chiseled from rough stone. Whether animate or inanimate, their stoneskin provides them protection where they can only be damaged by magical weapons or weapons crafted from adamantine.

Elemental Nature. While inanimate, they remain aware of their environment, but are generally undetectable. They can remain in this form indefinitely, because they do not need to eat, drink, sleep or breathe to survive.

Shadowy Aura. They are surrounded by an aura of desecration which cases their body to appear to be infused with an equal amount of pure shadow. This allows them to blend in with other statues of non-living gargoyles, thus hiding in plain sight, or by providing a level of camouflage to hide among rocks, in crevices, or in the shadows.

Energy Drain. The aura of desecration acts as an energy drain. Anyone touching a nightgoyle will begin to feel weak as their life force is slowly absorbed by their shadowy aura. This includes severe muscle weakness leading to collapse and excruciating pain. After long term exposure, the effects lead the individual developing a fever, then losing consciousness and eventually death.

Sunlight Sensitivity. Their only true weakness is they are weakened by both natural and magically-induced daylight. If exposed, they undergo involuntary petrification. While in this state, they can be bludgeoned and shattered or moved with some physical effort. Artificial light doesn’t weaken them in any noticeable manner, but their ability to camouflage and see is certainly hampered.

Gargoyles are written into modern history as artistic monuments constructed from stone. These are placed on buildings to help prevent the erosion of the walls of stone buildings by acting as gutters or simply by deflecting rain water. These grotesquely carved faces appeared to have faces with human or animal-like faces.

Sages will whisper the incomplete lore of the gargoyle. Whether the architectural gargoyles were crafted as replica to creatures the ancients observed or not is a topic of debate. The legends tell at some point, an unknown mage dabbling with the art of golemancy gave life to these monuments, who later became the monsters that once stalked the Earth.

These gargoyles served their master faithfully by guarding his workshop from his adversaries. They were quite efficient at keeping evil spirits and other adversaries away. In exchange, he would care for them and occasionally give them a shiny bauble or coin to play with or chew on.

Until one day, an alchemical experiment went horribly wrong and the mage died in the ensuing explosion. The gargoyles were left alone, anxious, and angry. From this time forward, they began to procreate and steadily grew more vicious and less tolerant of humans.

It was common for a gargoyle to terrorize a henhouse or field of sheep until the clatter rose a sleeping farmer out in to the dead of night and into their trap. Similarly, tales of a nastiness cornering an unsuspecting person walking home late at night are told.

Historically, hunters seeking to secure the safety of their cities began to try and draw out the gargoyles from their perches. Over time alchemists began to pay handsomely for the horns, teeth and claws to be used in various magic potions. As the power and numbers of humankind increased, the final gargoyle met its end somewhere in the 7th century and was sent to the Pits of Tartarus for eternity.

It is unclear how or when it happened, but it is suspected the dark spirits of the Oneiroi, born of the goddess Nyx, intermingled with gargoyles. The ensuing offspring carried traits of not only gargoyles, but also those of the deities of darkness, sleep, death, strife and pain. Over the centuries, this interbreeding led to the rise of the nightgoyle.

Another theory holds that the longer a gargoyle lives in a region, whether it be caves, ruins or buildings, the more it begins to resemble that regions natural state or architecture. This change in a gargoyle’s appearance is slow and subtle, but over the course of years can be a radical shift. Therefore, the repeated and extended exposure to the nightmares of the underworld caused this new species of nightgoyles to evolve.

Regardless of which theory is true, the nightgoyle can now be found throughout the lands of Oneiroi and Tartarus.

Like their predecessors, nightgoyles can be best described as obsessive-compulsive in their thoughts and behaviors. They are petty, vindictive, but most of all treacherous.

Yet, they can be quite patient in their hunting tactics. Nightgoyles favor surprising their prey, either by moving suddenly from their motionless state or swooping down on their prey from a height.

They are found hunting solo, as partners, or in groups. A group of nightgoyles is often referred to as a “wing” or “nastiness.” For example: “A (wing) nastiness of nightgoyles descended from their lofty perches to seek a hapless victim.”

However, they have an extreme tribalist instinct and rarely ally with other entities. On these occasions, they may work for an evil master in exchange for a bauble or small amount of treasure. Although, they are always happy for the opportunity to attack intruders.

They enjoy decorating their chosen lair with shiny objects such as gemstones and precious metals, but will lift any spoil of war they can from their fallen foe (e.g. books, small trinkets, tools or weapons, and grisly trophies). This leads to quite a cluttered stash. Due to their love of treasures, they seldom fly very far from the safety of their home.

They are mainly found in natural caves, caverns, or other subterranean regions. Like their progenitors, they have adapted to live amid ancient ruins of fallen empires. Many have found it advantageous to perch on tall buildings in bustling cities. Even here, they can hide in plain sight along the roof tops and swoop down to attack at night.

They love to inflict pain. Their primary form of attack is with their claws, their horns, or their fangs. With these weapons, they torture and play with any victims they can hold helpless. Before long, they will eat their victims alive just to hear their screams even though they required no food to survive.