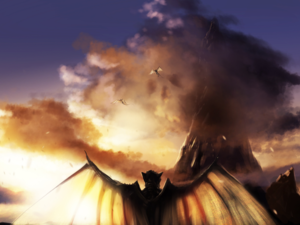 Nargoyles resemble Nightgoyles in may ways. However, their wings and feet have evolved to be more useful as flippers or fins. Instead of two horns on their head, they will often be found with one spiraling horn protruding from their whale-like face resembling that of their namesake, the narwhal.

Otus, known as “Insatiable”, and Ephialtes, known as “Nighrtmare” were two of the Alodae. they were the sons of Iphimedia who was marred to Aloeus. However, it was Poseidon who caused her to become impregnated. When Impimedia went to the seashore and submerged herself in the surf, forcing the fertile seawater to her bosom and inside her.

She gave birth to these strong and aggressive giants which grew by nine fingers each month and reached the size of nine fathoms by the age of nine. It says that only Orion was more beautiful than these two Aloadae.

Having an affinity for the sea, they often frequented the waters of Oceanus and all the other waters of creation. Among some of these waters, you could find the Kapoacinths. These were an unusual variety of gargoyle.

Often gargoyles would find themselves stowed away on ships and other fighting vessels. With their adaptive abilities, they soon learned to take on the shape of dragons or other beasts to adorn the ship’s bow or masthead.

Ship captains typically had adorned their boats to scare away demons on their approach to shore. However, they were unable to distinguish between the carvings they had purchased and the gargoyles which replaced them.

Often, the ships would be lost at sea– either victims of storms, the sea, or warfare. When this happened, the Kapoacinths would find themselves stranded in deep oceans, obscure waterways, or even in the narrow shelves at the edge of the continental crust.

Many returned to their former lives taking up residence in the port cities, but others grew accustomed to the travel and the feel of salt spray and cool breezes. The latter remained in the sea and adapted to life there.

Those that died, for whatever reason, found their way into the Rivers of the Underworld. It is believed that these particular kapoacinths drew energy from the visiting Aloadae and became the gruesome nargoyles.

These strange creatures retain a gargoyle’s fearsome appearance, but instead of swooping through the night sky, Nargoyles glide through the depths of the seas, their wings useless for flight.

Schools of Nargoyles are more likely to gather than their land-based cousins since they have no interest in solitary life.

They tend to dwell in coastal shallows rather than the dark depths of the open ocean. Though they are aquatic creatures, they can survive on land and enjoy shambling out of the water to attack isolated coastal communities.

Seashell Shillelagh – Nargoyle’s craft what appears to be a walking stick out of seashells and fish bones. These shillelaghs have similar, but significantly scaled down, powers to that of Poseidan’s Trident. So, rather than being able to create a foaming tsunami, they may just be able to create one isolated wave. Most prefer to create swirling eddies to pull their prey under water. If on land, they can strike the ground and create enough of an earth tremor to even knock a deity off-balance.