Status. Believed to be extinct 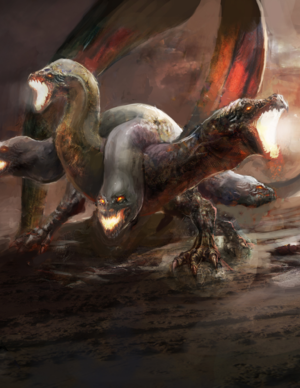 The Hydra was created by Typhon and Echidna. The monster guarded the swamps of Lerna throughout its entire life. Its life was ended early by the demigod Herakles. Herakles was sent to destroy the monster during his twelve labours. When the demigod chopped off one head, two more grew back. With the help of Lolaus, Herakles managed to apply burning brands to several of the stumps of the Hydra. This prevented the Hydra from regenerating it’s heads and in the end to its defeat. When the Hydra died, Hera placed the Hydra in the constellations to always be remembered.

Physical Description. The Hydra was a gigantic water-serpent that had nine heads. It has snake-like heads with a large body that has four legs. Its scales were blue and yellow that shone in the sunlight.

Regeneration. When the beast's head was cut off, two more grew in its place.

Pick A Head. Each Head of the Hydra spews a different type of toxin, one is acid, another fire, another boiling water, etc.

HYDRA LERNAIA (Lernaean Hydra) was a gigantic, nine-headed water-serpent, which haunted the swamps of Lerna. Herakles (Heracles) was sent to destroy her as one of his twelve labours, but for each of her heads that he decapitated, two more sprang forth. So with the help of Iolaos (Iolaus), he applied burning brands to the severed stumps, cauterizing the wounds and preventing the regeneration. In the battle he also crushed a giant crab beneath his heel which had come to assist the Hydra. The Hydra and the Crab were afterwards placed amongst the stars by Hera as the Constellations Hydra and Cancer.[1]