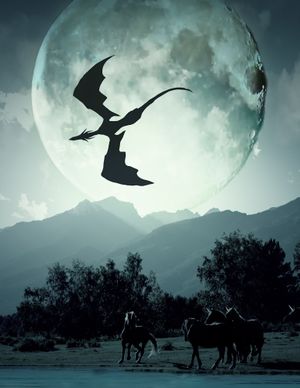 Drakons have a bony and thorny skull with eyes slit wickedly to give it a mean threatening appearance. Eye colors vary between bright yellow, ocean green, obsidian, and dark purple depending on the variant of drakon. Several large tendrils sit atop their head, just above their narrow, cat-like ears. Several rows of small horns or scales run down the sides of each of its jawlines depending on the variant.

A drakon’s nose is thick and has two long, oval nostrils. The size of the nostril varies between fire-breathing and nonfire-breathing types of drakons. Several rows of large teeth poke out from the side of their mouth to show a glimpse of the terror hiding inside.

A narrow but strong neck runs down from the head into their body, the size and shape of the body vary depending on the type/variant of drakon. The top of their neck and body are covered in scales with the armored ridge that runs down their spine. The bottom is covered in wide scales and is colored differently than the rest of its body in all variants. Four muscular limbs carry their body and allow the creature to stand towering and sturdy. Each limb has 4 digits, each of which ends in thorny talons seemingly made of stone in all variants except the Marine Cetae where it is made of ocean pearls.

Colossal wings grow starting from its shoulders and end at the end of its shoulder blades. The wings are bladed in structure, the edges of the skin inside the wings are tattered and damaged and jagged edges at the bottom almost give it a feathered look. In the Marine Cetae variant, the wings are replaced with large, strong fins that help the Cetae lift off the surface of the water but not fly high.

All variants of the drakons have an elegant tail that ends in a scythe-like blade and is covered in the same scales as found on their body. It is impossible to list the enormous variety of hues that make up the dragon’s brilliant coloring, but they can be divided into three broad color groupings:

Blues: all shades of blue ranging from dark blue to silver and mother-of-pearl.

Although these three principal color groups are not usually mixed, a drakon’s coloring is rarely uniform. In general, the scales are several hues from one of the main color categories, with a metallic luster which is hard to define. When the scales have a pale, opaque appearance, it is a sure sign of ill health.

In early cultures, the dragons were seen as mighty serpents and beasts that were either extremely benevolent or fearsome and difficult to kill. The beliefs of a region are often influenced by geographical location. Eastern cultures often saw dragons as a powerful and benevolent creature that could ward off evil. In the Far East, the dragon managed to retain its prestige and is known as a beneficent creature. Western cultures, however, often saw dragons as evil beasts that reveled in killing and chaos.

In the Middle Eastern world, where snakes are large and deadly, the dragon was symbolic of the principle of evil. But the Greeks and Romans, though accepting the idea of the serpent as an evil power, at times conceived the drakontes as beneficent powers.

On the whole, however, the evil reputation of dragons was stronger. The dragon’s form varied from the earliest times. The Chaldean dragon Tiamat had four legs, a scaly body, and wings, whereas the biblical dragon of Revelation, “the old serpent,” was many-headed like the Greek Hydra.

Drakons by nature are loner creatures. A male drakon is attracted to the female during the mating season only. A female drakon protects its eggs until it hatches, after which it lets the baby drakon tend for itself. Drakons spend much of their time alone in their lair, during this time, they learn about their environment and how to use it wisely. Most drakons enjoy the company of the immortals and even humans as long as the drakons believe they are not being conquered or stolen off their lair. Drakons are very hard to tame, but once they warm up and begin to trust their immortal, they become loyal to them with their lives.

Taming a drakon requires more mental strength and ability than physical strength, these creatures are huge and powerful. While the influence of magic works on them temporarily, their effects wear off quickly. Depending on the variant of drakons, they have the power to manipulate the elements.

Fire Breathers: Drakons have the ability to store the Methane gas released from their body when the food they ingest is digested. This gas is stored in a third “lung” serves as a bag to hold the gas that will later be mixed with a small amount of phosphor that has the propriety to ignite the fire when in contact with air. When the drakon wishes to breathe fire, the methane is released into the lung and when the gas is in the air, the phosphor ignites and also puts the methane in the fire. A full breath of fire is powerful enough to incinerate an entire village. The drakon has the ability to manipulate fire and the intensity of the burn, which helps them use their breath as a weapon. The immortals are immune to death but will experience pain from burns for a period of 24 hours. The Dracaenae and Serpentine Dracones are the perfect examples of fire-breathing drakons. Sayeh, the Dragon of Goddess Artemis falls in the fire-breathing Dracaenae category.

Frost Breathers: Some drakons breathe a cone of frost that can instantly freeze and kill their victim. Similar to the fire breath, the frost breath is created from the food ingested by the drakon. When the food is broken down, it releases Nitrogen gas which is compressed by extremely strong muscles, exactly alike the base system of a refrigeration system. When a dragon needs to freeze an opponent, the highly compressed nitrogen is released in the lungs and when the gas comes in contact with air it decompresses at an incredible speed. While the frost breath kills a mortal, immortals are frozen in place for a period of 24 hours. The Marine Cetae is the perfect example of a frost-breathing drakon.

Acid Breathers: This group of drakons breath acid instead of fire to incinerate their victim. The acid, like in the case of fire and frost breathers, is created from the food they ingest. The acid breathers have an additional stomach that houses the acid produced during digestion. They are able to release a large amount of acid, enough to incinerate a large crowd in just one breath. Normal protective armor does not protect against the acid released by these drakons. While the immortals are immune to death, the acid causes extremely painful burning sensations that last up to 24 hours. The Chimaerae are examples of acid-breathing drakons.

Although it seems like there is a direct link between a drakon’s breath and their food, starving or depriving a drakon of food does not degenerate a drakon’s breath weapon. All the incredible system of a drakon makes it one of the most fascinating creatures in the known universe.

There are four variants of Drakons found in Mount Olympus: 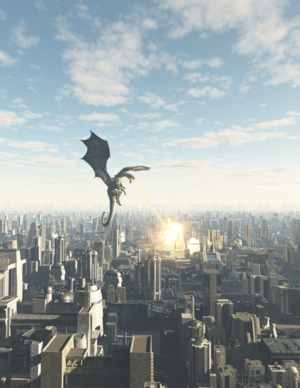 The dracaenas are fire-breathing dragons with a scaly body, four sturdy limbs, and a serpentine-like tail that ends with a scythe-like blade. These are powerful creatures that can attack and kill at will but do not do so unless their existence is under crisis or to protect their immortal companions. They have the ability to control the elements of fire and wind. The only way to kill a dracaenae is by using an iron spear to puncture its third lung. Spears or arrows to any other body part may slightly wound them but they have self-healing capabilities. 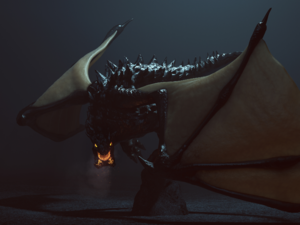 The chimaeraes are the most dangerous and evil of all the drakon species. They are highly aggressive and attack without provocation. They have a typical dragon head, serpentine-like tail, lizard-like body and paws with sharp stony talons that can tear into any animal or human with ease. These acid breathing creatures have the ability to control metals and other earthly elements. This makes them very powerful and almost impossible to kill. One way to fatally wound a Chimaerae is slice open their additional stomach located on the bottom left side of its body in order to leak their deadly acid within their own body. Direct Sunlight can impale their powers thus they prefer to dwell in underwater caves coming out only during the darkest of nights. Exposing a chimaerae to sunlight continuously for a period of ten hours can be fatal to them. 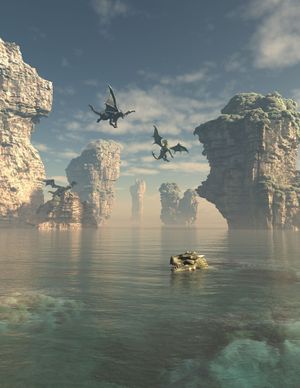 These drakons are water serpents some of them with multiple heads. They have dragons also have serpentine-like tails, large slimy fins in place of wings, and four webbed feet that help them swim and also walk on land. Ceteas are amphibians and can survive outside the water, but not for more than a continuous period of more than 48 hours. For this reason, they rarely venture further away from water bodies. The only way to kill a Marine Cetea is to chop off their head or trap them on land for more than 48 hours. Marine Cetae were extensively hunted for their pearl talons which are priceless, hence most of them have retreated to living in underwater realms.

These drakons possess great wisdom. They contain the body of a snake, paws like tigers, and sharp claws like an eagle. They hunt more with the brain than brawn. They have the power to control weather especially rain and wind patterns. Their bodies are lean and long like that of a snake, while they have wings, it is not as prominent as the other variants of drakons. They cannot fly for long distances at a stretch but can stay on air using their power to control the winds. They rarely attack a mortal, are very friendly with the immortals and hunt on smaller animals only for food. It is also believed that the serpentine dracones tears possess magical healing abilities. They are fire-breathing like the Dracaenae and can only be killed with a silver blade.