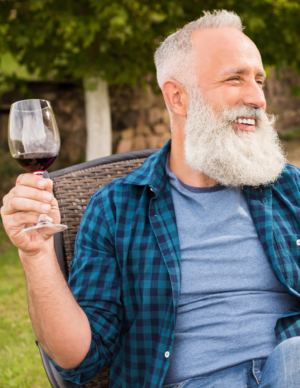 I didn’t want to, but I eventually decided to open one eye, and then the other, and then looked around in the dusty tomb. I sat up slowly, trying to shake the cobwebs from my mind, then stretched languidly with a big groan. “Ohhhh, my head,” I said to myself just to be sure I could still talk. “I don’t know who, but someone definitely spiked the punch last night.” Donning my sandals and reaching for my thyrsos, I walked over to the table, picked up my ivy crown, and placed it on my head crookedly. Who cares about isometry, after all? Not me. Looking around, I let out a soft laugh that turned into a cackle in the next breath and eventually died into a cough.

I made my way outside to the narrow street and took a few steps before a lot of yelling was directed my way, followed by a trumpeting bellow. Turning, I had barely enough time to side-step the laden elephant lumbering down the street. “Oh great,” I said out loud, adding an eye-roll, “I must be in India again. No wonder the bike lanes are on the wrong side of the street. Leave it to me to get plastered in a place where the only alcohol they sell is the rubbing kind.” I laughed heartily at my own joke until I ran out of breath and then leaned heavily on my thyrsos.

Slowly—every step took me closer to the edge of the village—and a few more steps after that led me into the woods. Once safe in the darkness of the forest, I swayed for a few seconds and thudded my thyrsos against the ground three times. I waited with my eyes closed, quiet and unmoving. A few minutes passed when suddenly everything around me went quiet. There was no more chirping and no more rustling about. Another silent moment passed before the reason for the hush announced itself with a low but powerful growl.

Opening one eye, and then the other, I smiled broadly and did a little jig at the massive male panther standing in front of me. He gave me a bored look, licking his maw. Looking the huge beautiful cat in the eyes, I made a circular motion with my index finger, pointing down. The large beast gave me a look, and I swore he rolled its eyes at me! A few seconds passed before the panther gave up with a snort and turned his back.

“You better turn around…” I returned the panther’s snort and reached out to scratch behind his ears. Heaving a leg over his back, I slid down close to his haunches, getting comfortable. I leaned forward a bit and grabbed him by the scruff of the neck. “To the airport, Jeeves,” I said with a chortle, “I have family that isn’t expecting me.”

The panther rolled his eyes at me for real this time, but I ignored the gesture. Moving along with the gait of the beast, I closed my eyes, trusting the cat’s sense of direction. I thought back on times of old...times of very old. The call of Olympus had not reached out to me for a long time…until recently. I couldn’t guess at what this calling I had felt the past months was all about. All I knew was that I had avoided it long enough, and it had gotten to the point where it was drowning all the other voices in my head.

When I opened my eyes, I was already standing where I wanted to be standing: in front of one of the many sliding-door entrances to the airport. I walked in with a mumble, leaning on my thyrsos, and made my way to the kiosk. I stared the tired-looking employee in the eyes. “I would like one ticket to Athens, please. Yes, the original one. None of the copies they made ages later. And of course, I want it to be first class. That’s where you get wine for free, isn’t it? Tell them to stock up on extra bottles of red. What’s that? Name? Dionysos. Yes, like the god. Last name? Don’t have one. I’m like…Cher, but prettier. No. What makes you think I was kidding? Do you take a check?”