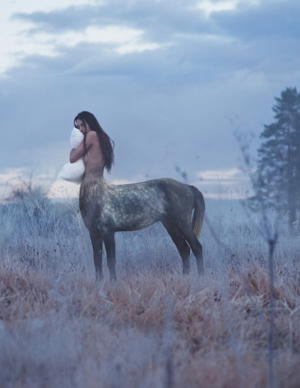 Centaurs were born from the demigod Ixion and the Nymph Nephele. Centaurs have made their homes in caves and in the forests around Greece. Centaurs disdain modern technology, and often chase hunters and poachers out of their areas of forest, many times even killing them, as they are well skilled with a bow and arrow. The most famous Centaur, would be Chiron, who entered into a relationship with Hestia and was kept alive by being in her presence. However, when summoned back to Olympus, Hestia left without Chiron and he passed away due to old age. Modern centaurs are war hungry, and combative, known to enter into fights they know they cannot win simply for the sake of pride.

Physical Description. Centaurs have the body of a man and the legs of a horse. They come in all different shapes and sizes.

Super Strength. Far larger than that of an average human, Centaurs maintain the strength of a man and the superior strength of a horse. A single kick from their hooves will usually kill a mortal.

Animal Sense. Centaurs also retain the ability to sense incoming danger, similar to that of a horse, who will sense an approaching disaster.

The Kentauroi were invited to attend the wedding of their half-brother Peirithoos (Pirithous) but became drunk at the festivities and attempted to carry off the bride and other female guests. In the battle which ensued most of the Kentauroi were destroyed.

Another tribe of Kentauroi (Centaurs) dwelt in the western Peloponnese where they came into conflict with the hero Herakles. Another tribe of bull-horned Kentauroi were native to the island of Kypros (Cyprus). Female Kentauroi, Kentaurides (Centaurides), were also known but only occur in late classical art and literature.

The Kentauros was depicted as a hybrid creature with the upper body of a man--from the head down to the waist--with the body and legs of a horse. It had the facial features of a normal man or, sometimes, the snub nose and pointed ears of a Satyros (Satyr).[1]