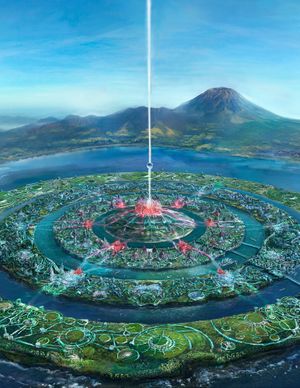 Atlantis and its Rings, before sinking. 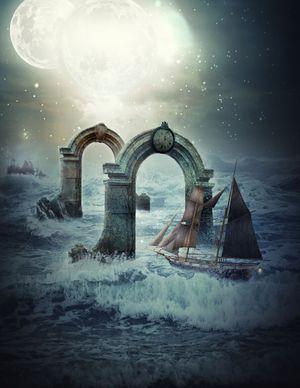 When the three kings divided lots for the world, Poseidon drew second and was awarded the seas with it capital being the sunken capital of Atlantis.

The Pillars of Hercules are located in Gibraltar. This area is used to teleport to two pillars that are just outside of Atlantis. It is a shortcut from Europe to Atlantis without having to swim 13,776 Kilometers to get there. The portal opens between the two pillars and is only triggered by a piece of dead coral that was enchanted to be the key for the portal. Atlantis is a pocket dimension, similar to the Underworld and Mount Olympus, only accessible through key locations throughout the world. 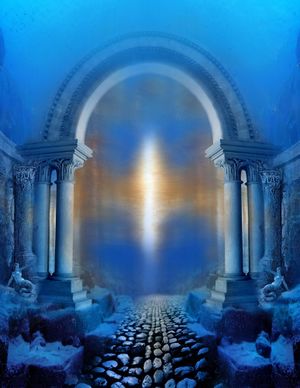 The city of Atlantis is located between Challengers Deep and Guam. It is home to all the Mers under the sea. Atlantis operates like a human city. There are laws and restrictions that the Mers have to follow in the city. For example, Mers can’t swim wherever they want. They must follow the roads built in the city to avoid running into others.

The city is lit up by a large ball of biolumensit seaweed that has been enchanted to hang above the city. The mers call it a sun even though it is not the real thing. It acts just like it. At night, it dims and acts like the moon. Giving just enough light for the mers to maneuver the city at night. The light makes the water around Atlantis crystal blue.

The builds are made of stone, glass, and marble. Phosphorescence wraps itself around all the golden pillars in Atlantis as well as some of the other buildings. The buildings are blue and green with gold outlining them.

Fish are able to swim freely in Atlantis. There are a few fish that aren’t allowed in the city which are the vicious ones like barracudas, sharks, and eels. There are guards that circle the perimeter of Atlantis to make sure no one enters Atlantis that is supposed to. A thin layer of protection magic circles the city as well to keep intruders out but it will be weakened if the King is not around or injured.

Technology. The Mers evolved slower than humans but are making technological advances. There are areas in the Palace that are dry rooms which are used to test new technology. Only blue fins have access to these rooms. There is a building, in the first ring, which is dedicated to scientific and technological discoveries to improve life in Atlantis.

The First Ring is the inner part of the city, close to the palace. This is where the higher class mers live and work.

The Second Ring is the outer part of the city, further from the palace and closer to the open water. This is where the lower class mers live and work. It is a little less safer in this area due to the fact the open water is what borders this ring. The buildings here are smaller compared to the inner city.

The Throne Room. The room is one the largest places in the castle. Dark blue moss makes a line all the way up to the thrones. Large ancient greek inspired columns reach fifteen feet, holding up the ceiling above. In the center of the ceiling is a glass dome, allowing one to look out at the ocean. Whales, dolphins, and fish swim by constantly. There are two thrones, one for Poseidon and one for Amphitrite. The throne will only recognize its true rulers, Poseidon or Amphitrite, without them, the Castle falls into disrepair. Unlike Mount Olympus and the Underworld, Atlantis is almost alive.

This area is where all the treasures and artifacts, located beneath a giant golden seal in the middle of the throne room floor. It can only be accessed with the Trident. The seal then forms a set of stairs into the Vault below the throne room. Blue algae lights the steps down, and once off the last step, the seal recoils locking, then water drains from the room. Once entering the first room. The water is drained from this room before the second door opens. In the middle of the room is where all the gold and treasures from wrecked ships can be found. There are also artifacts in this room of magical and non-magical descent. 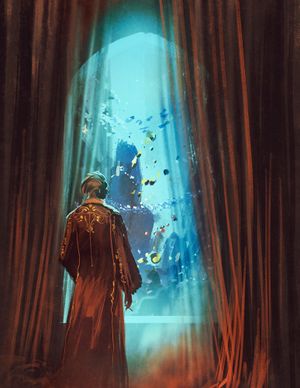 Poseidon’s Bedroom. The dome shaped room is located near the top of the palace. To enter the room, one has to swim up a hallway, where a door is. The room is fitted to be a pocket of air where only Poseidon and the most trusted bluefins can enter. Inside, there is a large bed. The ceiling is made out of glass, where Poseidon can see fish swimming around Atlantis. Long ago, it was sealed in such a way that if Poseidon wishes, it can be drained of all sea-water, providing him one of the few places he can be truly alone in the palace.

This area is where all the important scrolls and books are kept. Only the King and a few other trusted members of the kingdom are able to enter this room. To find this room, one must enter a secret passageway located on the main floor. There are two doors one needs to go through before entering the room. The first door is opened by the Triton and a special key for others. Once entering the first door, the water is drained from this room before the second door opens. The room is large with bookshelves located on the walls and in the middle of the room. There are a few wooden tables and chairs near the front of the room. The windows of the room are darkened until someone is in the room. They then turn clear, allowing the bioluminescent ‘sun’ light the room.

All mertails can change colour depending on the role given to them by the King.

Currency. In Atlantis they use shells for currency. There are different coloured shells to represent how much they are worth:

Kai. He doesn’t live in Atlantis but he used to be the old Advisor for Poseidon.