Medusa is the mortal gorgon, currently voiced by Jennifer Morton. 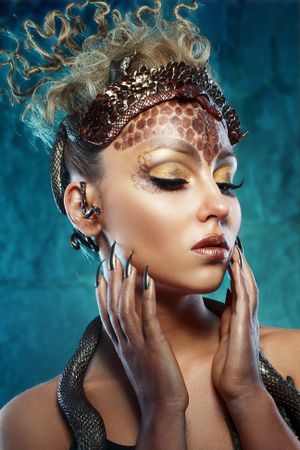 Distinguishing Features: She has a very sensual beauty, but when she releases her Gorgon side, her eyes turn red, her hair turns into snakes, and her skin turns an ashen grey.

Parents: I was born at sea. My father is Phorcys and my mother is Ceto, ancient sea gods. My grandmother is Gaia and my grandfather is Oceanus.

Siblings: Stheno and Eryale are my Gorgon sisters. Of the three of us, I was the only mortal. Other siblings are The Hesperides, The Graea (the three witches who share an eyeball), Thoosa, Scylla, and Ladon.

I prefer living near the ocean, but for now, I am staying at the God Complex HQ on Floor 26.

General Overview: On a normal day, Medusa is just trying to adjust to the new world around her. She’s trying hard to keep her Gorgon side under control, but when her emotions run high, her snakes get agitated and that side of her pushes for control. She wants to reconnect with her family and form new bonds with her old friends. She is very protective of those she calls family and friends and will defend them unconditionally. Medusa is comfortable with mortals and feels like she can relax around them and be herself. Unfortunately, because of the lack of control over her powers, it is hard to be among them. When she is around certain gods and goddesses, she is quick to anger. She sees herself as damaged because of her past with Poseidon, but she is determined to find her place among the gods and goddesses.

No Middle Ground. Medusa tends to take things to extremes. It’s either one side of the line or the other. Black and white. Day and night. Flesh and stone. It’s best you stay on the correct side of that line.

Stranger In A Strange Land. Medusa did not live through the centuries like the rest of the immortals, so she has limited experience when it comes to living and interacting with mortals. This puts her at a disadvantage in social settings and has made her readaptation difficult as she acclimates to the modern world and all its people.Handle With Care. Medusa’s emotions run high and wild, which makes it difficult to control her power. She loves fiercely and hates with an equal passion. This creates emotional instability that affects her control and her decisions.

Gorgon. As a Gorgon, Medusa can offer apotropaic protection from evil. Medusa can appear completely human, because she was human, and it is still a part of her, just as the Gorgon is a part of her. She had been cursed to become a monster. When she feels strong negative emotions her Gorgon side fights for control. When she releases her hold, she can fully transform into the Gorgon. If she is fully in control, she can partially transform her hair to show off her snakes. They are highly venomous, and one bite is fatal to mortals.

Curse of Stone. Medusa can turn flesh to stone. When a mortal looks upon Medusa’s face, they are turned to stone, thereby trapping the soul in the stone with the flesh. The soul cannot go on to the Underworld, thereby ending its existence as cursed as Medusa is herself.

Blessing of Flesh. Medusa has learned to transmute the power of her horrible curse and reverse the process that turns flesh to stone. There is a time limit to being able to restore stone to flesh, keeping the soul intact. At the next sunset, the soul dies within the stone and cannot be restored, thus ceasing to exist. Medusa can still turn stone to flesh again after that window of opportunity, but should she choose to do so, the flesh reanimates, creating a Soulless being, which is immune to her Curse of Stone, but likewise is uncontrollable, lacking any mortal soul as its guide.

Stone Essence. After turning someone to stone and within the same window where the soul is still living, Medusa can pull the memories and emotions from the one she has turned to stone. This act accelerates the soul death. The soul will not exist in any form after Medusa extracts this essence from it.

Decimation. Medusa has the ability to break down the structure of stone, reducing it to fine sand.

Mesmerization. Almost a curse upon a curse, Medusa’s legendary beauty and compelling aura is mesmerizing to mortals. It is hard for her not to draw the eye, which requires her to be especially careful around mortals unless she wants to add a few more statues to the garden.

Alternate Dress Wear: She owns a huge variety of suits and has a whole wall in her closet dedicated to high heels.

Medusa was the only human child of the sea gods Phorcys and Ceto. She was born mortal, and very beautiful, with golden blonde hair. She vowed to be a priestess of Athena and remain celibate. She was unable to keep this vow when she fell in love with Poseidon. Instead of loving her, Poseidon attacked her in Athena’s temple.

Athena was furious, but Poseidon was a powerful god, she didn’t dare take her anger out on him. She focused all her jealousy and anger on Medusa and cursed her to be a hideous monster. She replaced Medusa’s beautiful golden hair with snakes and turned her perfect complexion to an ashy grey. Her teeth lengthened to become fangs and her eyes burned with a fiery glow.

Polydectes, the king of Seriphos, then commanded Perseus to cut off Medusa’s head. It was a quest he wasn’t meant to survive. However, he had help from Hades, Athena, and Hermes. Medusa was pregnant when he attacked, so when he cut off her head, her two sons, Chrysaor and Pegasus, were born from her neck.

Perseus returned carrying Medusa’s head in his sack and when he took it out to show Polydectes, he was turned to stone. He then presented the head to Athena as a gift, which she placed on her shield.[1] [2]

“Medusa once had charms; to gain her love A rival crowd of envious lovers strove. They, who have seen her, own, they ne’er did trace More moving features in a sweeter face. Yet above all, her length of hair, they own, In golden ringlets wav’d, and graceful shone.” – Ovid, Metamorphoses

Pain seemed to come out of nowhere, and everywhere at the same time. It felt like I was being pulled at from every direction, the pain stealing my breath.

Just when I thought I thought my mind couldn’t take anymore, I found myself standing alone, staring out over the ocean. The water raged, and thick black clouds blocked out the setting sun. Looking down at my body and finding it whole, my mind raced to put the pieces of time together.

I could feel the power slowly fading and followed the trail to Zeus before it was gone. Confusion washed over me. Why had he called me back? How?

I focused on my scattered thoughts and questions and put them all away. It could wait. For now. Turning from the ocean, I started pacing.

My mind drifted back, pain washing over me as I remembered my last days. As if the pain from Poseidon’s attack wasn’t bad enough, Athena’s betrayal broke me. I knew she was jealous, I just never expected her to take it so far. A scream tore through me, the control I had falling away in an instant of fury. Through the haze, I felt my skin harden, and my snakes work themselves into a frenzy around my head. I let the rage pour through me as the wind howled around me. I lost myself in the pain.

Just when I felt like I would never find my way back, a terror-filled scream caught my attention and I turned towards the sound. The second my eyes found his, he was gone. Forever standing with his arms held out in front of him, as if he was trying to ward off an invisible enemy.

I had to fight to calm myself, sooth my snakes, and smooth my skin. It took longer than it should have. Once I had control, I took a moment to feel sadness for the man that would be forever frozen in fear. I wanted to protect mortals, not give them reasons to fear me. There was nothing to be done for him now though, but he could still be useful. Resting my hand on the rough stone of his arm I concentrated, pulling out what I could from his memories. I needed to get what I could quickly before his soul moved on, and the essence of who he was faded from the stone completely.

Shock had me pulling back and I swore at myself for breaking contact. The world had changed. More than I could have ever imagined. I couldn’t leave him here, now was not the time to be careless. I put my hand back on the stone and pushed just a little power into it, watching with sadness as it crumbled and fell to the sandy ground.

I could feel the turmoil left by the Titans’ escape. I could feel Zeus’ pain. I needed to make the gods pay for what they had done to me. I wanted to find my family, I needed to. I had my second chance. Whether Zeus intended it, or not, I didn’t plan on wasting it. I am Medusa, the most powerful Gorgon, and I am back.