Caerus is the god of opportunity, and youngest child of Zeus, he is currently voiced by Jason Elmassian. 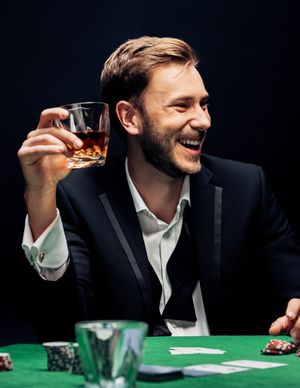 Siblings: Please, no one has an address book that big.

The Golden Die, an illegal ten table operation in an alleyway on the upper east side.

New York City, Upper East Side near Park Avenue. All other details withheld for your protection.

General Overview: Caerus has enjoyed the trappings of a God in the modern world. He relishes the finer things in life, and as the world has evolved, so have his tastes.

Likes: Creating despair in others, the feeling of power, expensive liquor, and fast women.

Dislikes: Not feeling in control, being deceived.

King Bee. Caerus is the top of the heap, the center of the universe. Ask anyone who works for him. And he likes it that way. Because he has no control over his own fortune, he comes up on the outside by controlling everyone else’s. In situations where his position is upset, Caerus becomes moody and dismissive of others, driving off outside opinions and influences until only his remains. Long live the King.

All That And Then Some. Caerus believes he is the smartest person in the room. Time has not helped this misconception as his cleverness has saved his own ass far too many times for him to doubt his superiority. To make sure that he never wakes up from his own delusion, he deliberately tilts situations to put others off-guard. He is a walking, talking, self-fulfilling prophecy.

Blood In The Water. Caerus is always looking for someone he has wronged in the past to take a bite out of him. Immortals might forgive but they never forget - and when you live forever, never is a long, long time. To protect himself, Caerus goes to great lengths to sever himself from his past, making sometimes hard and brutal cuts that leave him vulnerable and make him bleed. Caerus is always looking over his shoulder, always staying on the move, lest some former nemesis has picked up the taste of his trail.

Tip the Scales. Caerus can manipulate the luck of others, and uses it to his advantage in business and his personal life. The more he tips the scales, the more unpredictable the outcome becomes. This comes at a cost, as anything more than a minor tip can alter a person’s fate entirely. Tipping too much also lets the person be aware of Caerus’ influence, and this leads to unwanted attention in both cases.

Minor Telekinesis. Caerus can summon and move small to medium sized objects, nothing much larger than a toaster can be moved without causing a crippling headache.

Suggestion. Caerus can influence the behavior of others through skin to skin contact, causing them to be either more fearful or act more reckless.

Unburdened. Caerus may strip naked and run faster than anything else on the planet. He can be stopped by grabbing a hold of his hair from the front, but be warned: the chance of catching a fleeting opportunity more than once is impossible.

Dice of One’s Own Fate. Being able to manipulate the luck of others but unable to change his own can be confusing. These transparent green dice are made of powered hydra scales, with inlaid pips made from the Loom of Fate. Thinking of an action and rolling the dice will show the most likely outcome. A 12 means that the best possible scenario is the most likely. Snake Eyes (two 1’s) mean that a disastrous outcome is all but inevitable.

Anam Cara’s Token. Given to Caerus by the Morrigan during the time of his relationship with her, this coin was magically enchanted to warm in the pocket at her presence, alerting Caerus that she was near. As their relationship soured, the emotions twisted and began to burn with a different fuel - hate instead of love. The coin still reacts when she is near and helps Caerus stay two steps ahead of his old flame at all times.

The First Tarot Deck. The Fates occasionally need to meddle directly in the mortal world, but they prefer to partner with others to do it. Caerus agreed to be their “man on the ground” to ensure the Fall of Rome. In exchange for his help, Atropos gave Caerus threads from the cutting room floor. He made a Tarot Deck woven from these threads. Atropos made the stipulation that the cards could not read for Caerus’ benefit. He can read the cards for others but cannot interpret them for himself.

Very few things are written about Caerus, except for his uncanny naked speed. There was once a bronze statue of him, with a single curled hair.

I am Jason, scribe for Caerus. I was born and raised in Los Angeles, and have traveled the world since then. I have a love of fine food, fancy cocktails, and unforgettable experiences. I have been writing for most of my life, and am thrilled to see where the project takes me. Watch for my book out sometime this epoch!

Well, fancy seeing you here. I’m Caerus, and this here is my scribe. I have been hiding out wherever illegal gambling and shady dealings are to be had. I revel in strife and the despair of mortals and immortals alike. However, lately there have been strange dealings in my neck of the woods. That, coupled with a letter from home, has led me down an interesting pathway that may lead to my return to Olympus. Who knows? I might get up to a fair bit of mischief along the way as well.