Amphitrite is goddess of the seas, and consort of Poseidon, she is voiced by Natalie Bartley. 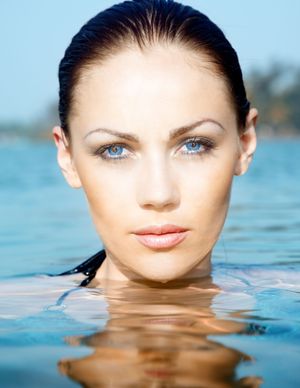 Siren Song. Amphitrite has the innate ability to lure men to the sea with the tones of her voice, both speaking and singing. The sound of her voice can cause all forms of madness: insanity, paranoia, desire, infatuation. This power loses its effectiveness the farther away from the ocean Amphitrite is. Once she can no longer smell a salt breeze, the power is reduced to nothing. Depending on the intensity of the effects of the song, the listener can be compelled to do most anything, even up to acting against their own self-preservation instincts. This works on both mortals and immortals, however, immortals will realize what is happening and have the choice to resist or succumb to the effects. Atlantis Call. In conjunction with Poseidon, Amphitrite can command the oceans to crest over the shores, rising to the level of Trinity, Inc. floods (or any point shy of that). This power can only be used while yoked to Poseidon, and Poseidon, likewise, cannot perform this task without Amphitrite. This power works through the displacement of the available water in the oceans and seas, pulling waters from other places and localizing them where the effects are desired. Since the power requires both Sovereigns of the Sea to perform the task if one or the other breaks the link, the waters dissipate and the spell ends. While Poseidon and Amphitrite are joined in this working, both of them are vulnerable to attack as they are fully merged with the seas they are manipulating and unable to divert attention or energy to anything else.