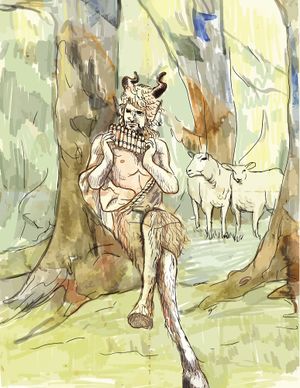 The Satyroi have three forms – fully human, half man/half goat, and their “war form”, which is to the average satyr like the Hulk is to Bruce Banner. They tend to the muscular/chunky, dark haired or red haired, and frequently tattooed/scarred up. They love wine, women, song, a good fight, and a good story. The chieftain of the Pack has gold inlaid into his horns, and the war chieftain has iron inlaid into his horns.

Satyrs pursue women, nymphs, dryads, and young men alike. They are extremely accepting of all variants of relationships as long as the Pack is strong. Satyrs breed true as long as the offspring is male. If the offspring is female, it generally will follow the species of the mother, except in rare cases. In the rare case of a female satyr baby, they are referred to as “fauns” and are destined to become the matriarchs of the Pack. They are invariably sterile, but exceptionally intelligent and become the repository of all of the Pack’s history and knowledge. A faun attends every satyr birth. Hestia works closely with the fauns of the Pack and keeps in touch with them, frequently returning to Scotland to assist if needed.

They are direct descendants of Pan, and haven’t changed much in two thousand years. Hector Opan, the leader of the Satyroi that follow Hestia, is Pan’s grandson and is the hereditary chieftain of that Pack. His son, Seamus Opan, is the war chieftain of the pack. Seamus’ grandson Connor Opan is Hestia’s consort.

Hestia’s Satyroi have become very Scottish, and very primal in nature – the monsters that lurk in the dark that keep humans inside on wild nights and the guardians of the wild places. Hestia greatly enjoys running with the Satyrs and will occasionally invite other Olympians/gods along. Hestia is more than willing to provide introductions to her Pack.

There are assumed to be satyrs in North America as well as in Europe, but they have not been seen. There are also satyrs native to Tartarus, but they are elusive and nightmarish, said to eat the souls of those they encounter.