Persephone is Goddess of the Spring and Queen of the Underworld, scribed by Jessica Lynn, voiced by Jamie Lynn Battle. 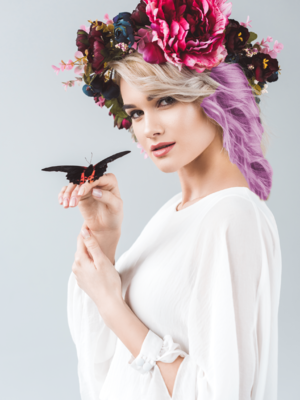 Distinguishing Features: The bright pink dyed to the ends of her hair

Licensed therapist and family counselor on call to speak with Titans and Olympians as needed. Overseer of the Dead while Lord Hades is away.

Six months out of the year Persephone spends with her mother, Demeter, in Olympus. The other six months Persephone resides in the Underworld with her husband, Hades, at their palace.

General Overview: Forever torn between the love for her mother, Demeter, and her love for her husband, Hades, Persephone’s mind broke under the pressure of being constantly divided. After a fit of uncontrollable rage, which caused her to take someone’s life, Persephone fled both the Underworld, and her mother. She hid away for an entire season, trying to regain some semblance of herself. Now she has returned to the Underworld, and her journey of self-discovery has only just begun. The repercussions of her actions are sure to come back to haunt her, and her marriage is in shambles, but Persephone is Queen of the Underworld, and as such it’s time for her to reign.

Likes: horseback riding (particularly Arion, who is her favorite horse in the stable) gardening, strategy games, and working out. She loves to test her limits and prides herself on staying in excellent physical shape.

People-pleasing. Persephone has a strong fear of losing people’s approval, (especially her loved ones) and will go above and beyond to make sure she doesn’t. When people are in need, it is difficult for Persphone to say no, as she not only has a genuine desire to help them, but she fears what they will think of her if she refuses. This has often led to her sacrificing her time and resources in unnecessary ways and being taken advantage of.

Empathy. Persphone is an empath and can pick up not only on people’s emotions but also animals and plant life. This can be helpful, but on the other hand, can become highly overwhelming when she doesn’t keep her ability in check. Likewise, if she is feeling negative, her emotions “leak” and directly affect the life forms around her. On a bad day, she can wither plants just by looking at them, or cause the people around her to experience traces of the same emotions she is feeling.

Perfectionistic. When it comes to matters within Persephone’s control, she holds herself to very high standards. This includes not only her performance but her morality. If she fails to be the type of person or behaves in the way she knows she should have, Persephone spirals to a very dark place, full of negative talk and self-sabotage. If she cannot accomplish something in the exact way she thinks she should, (even in something so small as losing at a strategy game) Persephone only sees herself as a failure.

Stonewalling. When Persephone encounters any kind of confrontation where she is hurt and made emotionally defensive, she will stonewall that person. This is particularly true when it comes to her marriage. Confrontations with Hades are never pleasant, and rather than face up to him, Persephone has a history of refusing to speak about what is truly bothering her, preferring to deal with her problems on her own and bottle them up. This behavior is very self-destructive, and as a therapist, she is aware of her problems and trying to fix them.

Empath. To her annoyance at times, Persephone can read any living being’s emotions. She can also project her own emotions onto subjects such as people, animals, and plant life, affecting them each in various ways. If she’s not careful, she might even do it subconsciously.

Flourishing. Since her mother, Demeter, is the Goddess of the Harvest, Persephone inherited some of her mother’s powers with nature. She can speed up any plant’s growth process as she wishes and can grow trees, bushes, and flowers on command.

Tracking. Persephone has a special knack for finding people. Using a combination of her empathic abilities and her connection with plant life, she can open portals to specific locations if a person has left an emotional imprint on the plant life there.

Normal Daily Wear: Being a Spring goddess, Persephone tends to wear pastel-colored skirts and flowy blouses with flats or small, open-toed heels. Pink is a favorite color of hers and her fashion style is very classic.

Alternate Wear:For celebratory occasions, (such as returning to the Underworld or festivals) Persephone favors silver, floor-length dresses or ones that drag along the floor. When she is riding her horses, she wears equestrian breeches, knee-high riding boots, and white, button-down shirts.

Persephone was the daughter of Zeus and His sister goddess Demeter. Goddess of Spring, Growth and Queen of the Underworld as the wife of Hades. When in the meadow picking flowers, Kore (Persephone) was taken by Hades and carried off to the Underworld to be his bride. Her mother, Demeter fell into a great sadness, and during this time as she searched the world for her missing daughter, the weather changed, crops failed and mortals suffered. During this search she was accompanied by the Goddess Hekate, and advised by the Titan god of the Sun Helios.

When Demeter learned of the Abduction, she demanded the return of her daughter, and would not allow the world to bear fruit until she was returned. Zeus relented, but because Persephone had eaten of the fruit of the underworld, the Pomegranate, she was bound to the Underworld. Thus the compromise was born, during the Spring and Summer, Persephone returned to the mortal world with her mother, the world blooming and becoming fruitful. Conversely when she returned to the Underworld, plants began to die and wither, and fall and winter arrive.

This story made her, even with the ancients, the symbol of vegetation which shoots forth in spring, and the power of which withdraws into the earth at other seasons of the year.

Though known for the Abduction of Persephone and the references to the wife of Hades, Persephone is also known for her wrath, as recounted in the story of Minthe.

“Minthe, who according to myth, became the concubine of Haides, was trampled under foot by Kore (Persephone) and was transformed into Garden Mint, the plant which some call Hedyosmos” – Strabo, Geography 8.3 14 (Trans. Jones) (Greek geographer C1st B.C. to C1st A.D.)[1]

My mind broke for awhile. I don’t know how I let it happen, but I did. The passion I feel for my husband Hades is indescribable, but the loyalty I have for my mother is just as binding.

Both of them are incredibly strong individuals. Confident, controlling, sometimes manipulative people.

I couldn’t stand up to them.

I couldn’t see how in trying to keep my relationship from falling apart, I was losing myself. My existence became an endless balancing act. Life on a tight rope. And a goddess of spring should never have to walk above the ground. I should have never been separated from the soil and the trees, bringing life everywhere I go. But, the Underworld is a dark, dull place, far from the beauty and flowers where I belong. My world went gray and I lost sight of who I was. I didn’t know how to help myself then.

Maybe I do now. The job of a fertility goddess is all about bringing life in its correct season.

Maybe now is my season.