Difference between revisions of "Morpheus"

Morpheus is the god of dreams, leader of the Oneiroi, currently unscribed, voiced by Michael Beckett. 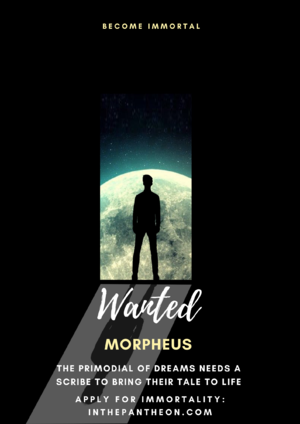 Distinguishing Features: Morpheus, like his brothers, has articulated wings similar to a bat or gargoyle, with black bones and phalanges and webbing of deep charcoal grey.

Siblings: Morpheus and his brothers make up the Oneiroi

The Underworld. Morpheus lives on the Isle of Oneiros in the Underworld, which is bordered by the River Lethe.

God Complex - Floor 9. Morpheus has apartments in the God Complex on Floor 9. Since Zeus called the Gods to return, Morpheus has taken to venturing to the surface more often to integrate his operations with mortals at Zeus’ request.

General Overview: Morpheus is the prime of Dreams, one of the thousand Oneiroi gods born to Nyx during the beginning of time. Though unlike other gods, he is almost completely powerless when in the physical realm, but is all powerful in the dream state.

Likes: Darkness. Reading. Poetry. Music that provokes an emotional response. Building within the Dream -- a form of architecture combined with creative art that creates new spaces for Dreamers to wander. Altering substances that make the Dream more vivid or bring it into the waking world. Good scotch and berry-based brandies. Silk.

Wrong Century. Morpheus sometimes appears and acts like he is from another time. Among the artistic community, this eccentricity is applauded though he can sometimes appear and conduct himself in overly formal ways. Piss him off and you half-expect him to say “Pistols at twenty paces?”. He is a consummate gentleman in a world that is rapidly losing all civility, but that sense of propriety makes it hard for others to get to know him.

Weaker In The Flesh. Even though he is still more powerful than mortals in the flesh, Morpheus knows he is strongest within the Realm of Dreams. Morpheus feels the lack of physical strength as a vulnerability and goes to great lengths to cover for it, keeping his emotions tightly under lock and key. He developed his skill with the sword to offset this vulnerability, which does not help with the impression he makes since people don’t just keep swords ready to hand, much less know how to use them.

Alternate Dress Wear: When work requires it, his “casual” mortal dress is black jeans and a black t-shirt and black boots. Even then, he carries himself like he was wearing a three-piece suit.

Poppy Tea. Morpheus knows how to concoct a tea blend comprised of the Dream Poppies that grow in Oneiros on the banks of the River Lethe. The tisane brewed from these poppies acts as a painkiller and can also be used as a supportive aid to facilitate lucid dreams. The poppy tea can induce group hallucinations and may also be used to help with analyzing messages.

Morpheus is the God of Dreams. Born of Nyx, Goddess of Night, firstborn of Chaos. Leader of the Oneiroi, his siblings by Nyx. Ruler of the Realm of Dreams.

Morpheus was known as a messenger of the Gods, bringing messages in human guise to Kings while they slumbered in the Realm of Dreams. The root of his name, morphe. signifies shaping or molding. As the ruler of his kingdom, Morpheus is responsible for shaping dreams, both beautiful and terrible, for all that sleep.

He resides in the Underworld with the rest of the Oneiroi, who fly forth from the Gates of Horn and Ivory to deliver both prophetic and false dreams to man and gods. Like his siblings, Morpheus is black-winged, but that is the extent of the similarities as the myths make it very clear that Morpheus is set apart by his ability to appear as a mortal in the dreams of mortal men.