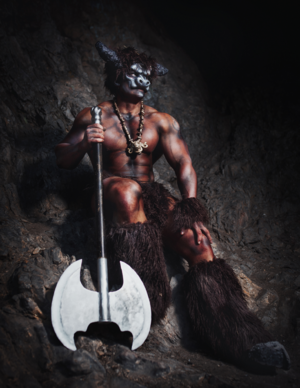 The first minotaur was born to Queen Pasiphae of Crete and a Kreten Bull. As it aged, the queen placed the Minotaur in a maze called the Labyrinth which was used to cage the beast. Young women and men would be sent as sacrifices to the Minotaur to satisfy its needs. In the end, the Minotaur was slain by the hero Theseus. After that, there have been other Minotaurs that have been born from women mating with bulls in ancient times. These Minotaurs have disappeared, either being locked away in a maze or a artifact or they are hiding away from society.

Physical Description. The Minotaur has the head of a bull and the body of a man. It was around seven feet tall without horns, eleven feet tall with. The Minotaur was very muscular and could hold up to five men in its arms. There was a gold ring hooked in its nostrils and it’s body was littered with tiny scars from the times people tried to kill it with their weapon.

Super Strength. The Minotaur is stronger than the average mortal male, his strength often surpassing demi-gods and even gods.

Bull in a China Shop. Do not enrage a minotaur, if the minotaur reaches blinding levels of rage, he will become unstoppable, plowing through anything and anyone until their anger is satisfied.

THE MINOTAUROS (Minotaur) was a bull-headed monster born to Queen Pasiphae of Krete (Crete) after she coupled with a bull. The creature resided in the twisting maze of the labyrinth where it was offered a regular sacrifice of youths and maidens to satisfy its cannibalistic hunger. The beast was eventually slain by the hero Theseus.

The Minotauros' proper name Asterion, "the starry one," suggests he might have been associated with the constellation Tauros.[1]