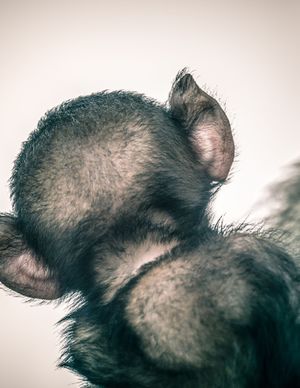 Imps vary widely in appearance, ranging through a spectrum of bestial traits and grotesque body shapes. An imp normally appeared as a tiny, red-skinned humanoid with bulbous features, a pair of fiendish black wings and a long scorpion-like tail ending in a poisonous stinger, containing a deadly poison. They stood about 2 feet tall, had a 3 foot wingspan, and weighed between 8-10 lbs.

Born directly from the pits of Tartarus, an imp is created directly from a lemure, usually by pit fiends or infernal dukes in need of disposable couriers or other menial servants, accounting for their vast numbers.

Imps are craven, fawning weaklings who obey stronger creatures without question. In addition to serving more powerful devils, imps were found in service to the twin gods Deimos and Phobos, and of the Erinyes, the three goddesses of vengeance subservient to Hades.

These tiny, black, winged monstrosities with over-sized ears, lashing tails and sharp-toothed grins, spill free of hell whenever they get the chance to wreak havoc on the local area by stealing chickens, pulling on hair and generally making a mess of things. While wildly inept, they can be dangerous if there’s enough of them, or they have the right training.

Imps hold an important role in the corruption of mortal souls. Unfettered from the ranks and duties of diabolical armies, imps delight in any opportunity to travel to the mortal plane and subtly tempt mortals toward acts of ever-greater depravity.

Infernal sacrifice. Imps are easy to summon. As a placation to their tiny egos, imps favor small, bloody sacrifices that suggest their summoner’s willingness to do evil. Those who offer a heart cut from the breast of a still-living dove are more likely to summon an imp.

Many evil spellcasters could be found with an imp in their company, serving as a familiar. Willingly serving spellcasters as familiars, imps play the role of dutiful servants. In truth, imps are not stupid and work to deliver souls to Hell, assuring that its master’s soul—and as many collateral souls as possible—faces damnation upon death. They use their positions of servitude to whisper in the ears of their masters and manipulate them toward evil ends. They would tempt their masters with cunning advice, infernal insights and other diabolic knowledge in exchange for increasingly petty and evil acts.

Unlike most devils, imps often find themselves free and alone on the mortal plane, particularly after they’ve been summoned to serve as familiars and their masters have perished (often indirectly due to the machinations of the imp itself). With no way to return home, these imps, freed of their bonds to arcane masters, can become dangerous pests or even minor lordlings over small tribes of savage humanoids like goblins or kobolds.

Imps frequently acted as manipulators in mortal lands, tempting the greedy, gullible or foolish into maliciously manipulative acts so as to corrupt them, ensuring a continuous supply of souls for the Archdevils in the Nine Hells. While physically weak compared to some lesser devils, imps were envied as the successful temptation of mortals to acts of evil was one of the surest paths to further promotions.

Most imps lack the ability to communicate through telepathy like most devils. However, they can innately sense magic or sources of goodness, turn themselves invisible, subtly influence other creatures with enchantment, and produce simple divinations. An imp commune with the greater powers of Hell once per week. Most imps can shapeshift into the form of a single animal to disguise themselves, typically a boar, spider, rat, or raven.

Imp Consular. One in every thousand imps possesses the ability to communicate telepathically with creatures within 50 feet and the power to change its form into that of any Small or Tiny animal. These imp consulars are highly prized by powerful devils, who send them to serve their favored minions or to corrupt mortals with great destinies.

Diabolist. A specialized breed of imp which appear similar to regular imps, but may have developed specialized abilities. These are extremely rare creatures, if they even exist at all.