Hephaestus is the god of forge and fire, he is currently voiced by Steve Lenker. 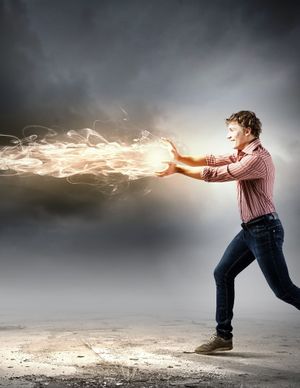 Heating metal. through concentration, I can heat metal in my sight to very high temperatures. Extreme night vision – I can adjust my vision to work in practically absolute darkness.

Life detection. through extreme concentration, I can sense the presence of all physical and nonphysical entities within a significant area.

Deflection. a mild form of mental persuasion that keeps people from noticing certain unusual traits of mine, notably my mortal business associates. For instance, they tend not to realize that I have not physically aged in the nearly fifty years since I founded Transpheri Technologies.

Crafting. surpassing skill in building and inventing anything at any technological level.

From an early age, Hephaestus has been used to taking care of himself. This started when, shortly after his birth, Zeus threw him out of Olympus for having been born with a deformed foot. Being a god, he bounced back quickly from this pitfall. He took to the company of mortals, learned all that they knew of metalworking, and came to excel at the crafting of unparalleled weapons and armor suitable for deities. Championing the growth of science and the exercise of reason, he grew to admire and befriend mortals who exhibited these traits.

With the rise of modern civilization, Hephaestus roused himself from an extended period of inactivity and paid close attention to the growing body of scientific knowledge. Finally, in the twentieth century, he founded a company that contributed to the aerospace industry. Now the company, Transpheri Technologies, is a space startup as well as a consulting firm for the solving of great problems through innovative technology. Hephaestus himself contributes a few of the ideas, but he prefers to cultivate such creative thinking among his employees. He closely guards the secret of his divinity from mortals, preferring instead to be regarded “merely” as the billionaire owner/CEO of the extensive Transpheri facilities in southern Fl.