Hekate is the goddess of magic, currently unscribed. 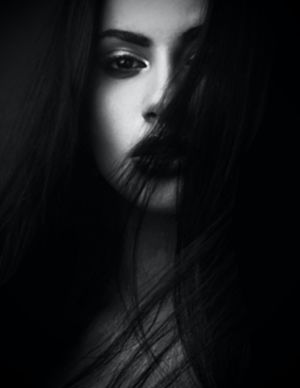 Parents: Perses and Asteria, The Starry One

Hekate resides on the 13th Floor of the GC HQ (God Complex Headquarters).

General Overview: Hekate is the daughter of the Titans Perses and Asteria, and the goddess of witchcraft and ghosts, her home is Propalyia.

Dislikes: Bland anything. Not a fan of daylight. Idiots with Ouija boards who create messes she has to clean up. Cowards. Being told what to do, not that she can remember the last time someone tried that.

Not Your Damsel In Distress. Hekate has an independent streak and a terminal case of confidence in her own abilities. As a result, she has a tendency to try to handle things on her own instead of asking for help. She learned this the hard way when taking on the Titan, Ostasus, but old habits die hard. Or not at all.

Open Book. Hekate was once untouchable, an unbreachable mind and an untameable heart. Then, in a moment of desperate need, Hekate chose to open her mind, heart, and soul to Hades, surrendering them into his control in order to save her own life. That moment allowed Hades unfettered access to everything Hekate thinks and feels. From preferences to prejudices, Hades knows Hekate on a level that would make him lethal to her if he chose to use that to his advantage. That intimacy has only continued to deepen, strengthening his access to her. With Hades’ charisma, Hekate is extremely vulnerable to the influence of the King, to the point of him being able to soften her iron will, even on things she would normally fight to the death over.

Witch Queen. As Goddess of Magic, Hekate can shape physical reality with her will. For example, she can control the four elements in a limited capacity in her immediate vicinity (i.e. probably could not manipulate water in the midst of a desert, but could if at an oasis). She can create spells that both bind and remove obstacles. She is adept at ritual craft and can make talismans, potions, charms, hexes, and other things that carry magic with specific intent (these often require research, preparation time, and acquisition of sometimes very rare ingredients). She can summon and banish elementals, demons, wights, and other plane dwelling entities, though her skills and powers will be pitted against the creature. She is a skilled herbalist and alchemist, having spent many years researching and contributing to the knowledge of magical Orders throughout the world. There are too many forms of magic to list, but as Witch Queen, she either is adept at them, or has connections with someone who is. She will occasionally come when called as part of coven invocations, which keeps her reputation as She Who Shall Not Be Fucked With nicely intact.