Difference between revisions of "Circe" 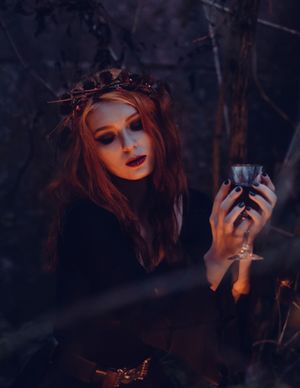 Betrayed. Circe is untrusting of most. Her husband’s infidelities and years spent living alone have taught her that it doesn’t matter how much you get to know someone, they can still stab you in the back and smile.

Triggered. Circe has a tenuous grasp on her emotions, reacting quickly to things, spurred by a heightened sense of awareness that bleeds into extreme anxiety. She is likely to react instead of act, which often leaves a mess to clean up later.

Mirror, Mirror. Circe has lived alone for so long, she has grown accustomed to only focusing on herself and her own needs. Add to that the betrayal by her husband and Circe has committed to be her own best everything - friend, defender, caretaker. She’s not quite as self-centered as Narcissus, but if you ask her where the center of the world is, she’s gonna check the mirror.

Babble-speak. Being part ocean nymph and considered a nature god, Circe has the ability to communicate with all living creatures: mortal, animal, and plant.

Potions Mistress. Circe has taught herself to master the brewing of potions and elixirs. Through the careful application of ancient texts and experimentation, she knows how to brew potions that heal and that can transform mortals into animals and vice versa. These potions take time and extensive supplies to craft, though Circe has all the time in the world, being immortal.

Siren’s Daughter. Circe has the ability to influence the minds of mortals and immortals with her voice, a gift she inherited from her siren mother. With mortals, she can instill simple commands and desires deep enough in the psyche that the mortal becomes obsessed with fulfilling it until the desire or command is satisfied. Immortals have a natural resistance to her siren song, but can be vulnerable if inebriated, altered by drugs, or especially weak.

Serpent’s Tongue. Wielding the powers of creation and destruction, Circe has the ability to speak spells that can bring on a natural storm or shield a small city from harm by natural forces. The amount of effort it takes to effect either of these is substantial, leaving her debilitated by headaches for several days afterward. During the recovery period, she has less control over her anxiety, but at least she knows that someone got what was coming to them - or was protected from the wrath of the gods.

Necromancy. Circe can call upon the spirits of the restless undead for information or to help with auguries (predictions). She cannot call upon any souls that have already crossed the Styx, but those that wander the mortal world are open to her call. She can only hold them for a brief amount of time, and to obtain the power for the spell, she must draw the lifeforce from a living thing to give the dead power to speak. Whether this kills her power source is a fine line to walk, and something Circe must be cautious of if she doesn’t want to end up with a corpse.

Animal Speak. Circe has the ability to speak to and understand animals. This manifests itself as a form of primal level telepathy combined with an understanding of animal mannerisms. Animals also have the ability to understand Circe. If the animal is a magical creature, it can be either easier to communicate or more difficult, depending on that creature's willingness to converse. This applies to vertebrate animals only.

Rhabdos. This wand, wielded by Circe, is used as a focal tool for gathering and directing her power. Formed from a burled piece of lightning-struck oak, inlaid with wraps of silver, with a gemstone-grade amethyst point fastened at the tip, the wand is an extension of Circe when working magic. Should someone pick the wand up without permission, they receive an electric shock and Circe knows that the wand has been handled.