Charon is the Ferryman of the Dead in the Underworld, he is permanently unvoiced. 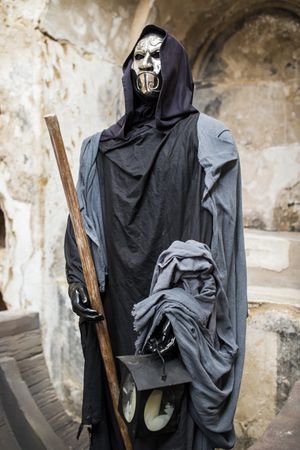 The Underworld. Now located in the sub-basements of the God Complex HQ, God Complex, Greece

General Overview: He doesn’t say much, communicating only in groans of various intonations. Charon has reasons for being cranky. Before the arrival of Lord Hades, Charon ruled the realm of death. He was demoted to ferryman with the ascendance of the Olympian spirits.

Immortality – Technically immortal. Immune to the effects of aging, cannot die by any conventional means, and is immune to all known mortal diseases and infections.

Mother Tongue. As the bridge between the mortal world and the divine, they speak all languages mortals do, even the long dead ones. However, Charon does not speak. Ever.

Grim Reaper – Charon takes various forms depending on his mood. He may appear as a simple, decrepit, sullen, elderly man or as a dark-winged angel. He may have wolf ears.

Normal Daily Wear: Ratty black robes with a hood. When ferrying the dead, he may wear a colorful tunic and conical, red hat.

Rowing Pole – The pole permits effortless rowing across any body of water and doubles as a formidable fighting staff.

In order to reach the afterlife in Hades, one must cross a river, the threshold between realms of life and death. Charon is the ferryman, the one who controls the passage. He’s a grim, cranky, merciless spirit. Those lacking a coin to pay for passage are left behind to find their own, painfully long, dangerous route to Hades. (Or to wander in the dark for one hundred years, whichever comes first.) Thus it was traditional to place an óbolos in the mouth of ancient Greek corpses, a coin of extremely little worth but sufficient to pay for Charon’s services. He also only accepts passengers who have received proper funeral rituals.[1]

There Chairon stands, who rules the dreary coast – A sordid god: down from his hairy chin A length of beard descends, uncombed, unclean; His eyes, like hollow furnaces on fire; A girdle, foul with grease, binds his obscene attire. – Virgil

The aged and dirty ferryman in the lower world, who conveyed in his boat the shades of the dead–though only of those whose bodies were buried–across the rivers of the lower world. For this service he was paid by each shade with an obolus or danace, which coin was placed in the mouth of every dead body previous to its burial. Many myths tell of heroes such as Odysseus, Dionysus, and Theseus journeying to the underworld and returning to the world of the living in Charon’s ferry.[2]