Apollo is god of the sun, healing and prophecy, he is currently unscribed. 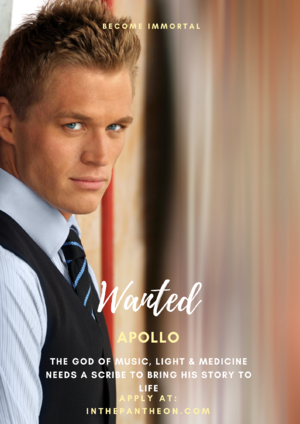 Hair Color: Blonde, usually in a short and conservative style

Siblings: Artemis (his twin), and many others

Children: 4, including Asclepius and Orpheus

Apollo runs a club called, Delos, he often performs there.

Apollo resides on floor 32 of the God Complex, in an apartment that houses a large collection of varied music.

General Overview: Apollo, twin to Artemis, is the son of Zeus and exists in a sort of state of dependency with his father, unlike his sister Artemis. Apollo's various abilities are all dependent on each other, and if he loses one, he loses them all.

Nicknames: Olly (to Artemis only)

Likes: All forms of music, lazing in the sun, keeping his archery skills sharp in contests with the other Gods.

Sister’s Keeper. Apollo is protective of Artemis as though she were an extension of himself. Should someone belittle, abuse, or make unwanted advances toward Artemis in any way, Apollo is like a sun gone nova. When his temper boils, the only person that can bring him back to earth is his twin.

Overcast. Apollo is at his strongest in direct sunlight. When he steps out of the sun - whether that be to go indoors or simply the passing of day into night hours - Apollo’s powers are diminished. It is not a complete loss of power, but the lack of sunlight causes all of his abilities to wane. His powers are restored again with exposure to direct sunlight. The ultraviolet lights mortals have invented cannot substitute. Apollo is not a plant.

Blind Seer. Paintings where the Oracles are blindfolded so that prophecy can be read true have their origins in Apollo’s psychic gifts. For Apollo to have a chance to read the future, he must stare directly into the sun. This renders him blind so that the visions can be seen clearly with the inner eye. This is why he does not like to do prophecy unless the situation is dire. This is also the root of why the Oracles were sequestered after delivering prophecy - Apollo has to keep to himself until sunrise the next day, allowing the darkness of night to cool him to normal.

Solar Power. As god of the sun, Apollo is able to utilize Heliokinesis, generating light akin to that of the sun, but at a far lower but still considerable temperature than the sun itself. This light’s primary purpose is to be used as a weapon. He can use this power in darkness as well, but its strength is diminished as with any other power when out of direct sunlight, in order to heal, Apollo must be in direct sublight.

Virtuoso. Being God of music, Apollo can play any instrument he touches as well as any master of that instrument. He can also bless mortals to either play well or play dismally, depending on their favor with him. He can also extend this power to blessing instruments. An instrument blessed by Apollo never needs to be tuned and never plays a wrong note. This boon is also only granted to those in favor and may be removed at any time.

Foresight. Due to his humble nature, Apollo was given the ability of foresight. Seeing the future extracts a toll on Apollo (see Blind Seer above) and so he refuses to speak of what he sees, even to his father.

Normal Daily Wear: When not on official business for Zeus, Apollo is often seen in casual clothing, quite often jeans, boots and shirts that bear witty slogans or pop culture references. However, when he is performing a task for his father, Apollo wears suits of either dark blue or black.

Bow of Apollo. Apollo wears a specially made pendant around his neck that - upon a touch - becomes his golden bow, which he fires using silver arrows.

Apollo's Lyre. Also on his person, Apollo carries a miniaturized version of his famed Lyre, which was made - along with his bow - by Hephaestus.

Born on the island of Delos to Zeus and Leto, Apollo is the god of many things including the sun, music, medicine, disease, prophecy and truth.

He is a slayer of several great mythological beasts, including Python, an act that led to the establishment of what is now the modern Olympics.

Apollo is also an oracular deity, considered the patron God of Delphi and the most Hellenic of the Pantheon due to his varied and often contradictory gifts. He was gifted foresight for his humble nature, but has never spoken a single word to another of what he sees, preferring to let the future unravel as it is intended.[1] [2][3]