From In the Pantheon
Revision as of 21:19, 3 May 2020 by ErostheAmor (talk | contribs) (→‎Skills/Abilities)
(diff) ← Older revision | Latest revision (diff) | Newer revision → (diff)
Jump to navigation Jump to search

Urania is the muse of astronomy, she is currently voiced by Kimberlee Gerstmann. 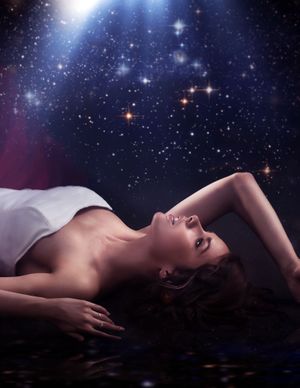 Bruh. Zeus in his almighty (cough cough) wisdom (cough cough) has decided that we all have to get real jobs, like mortals. I mean, I know I’ve never been the favorite child… let’s just face the facts that me and my eight sisters weren’t exactly conceived in love… but I didn’t expect that we’d be thrust into a nearly impossible situation where we are expected to instantly get jobs and make something of ourselves. Have you seen the economy lately?

The struggle is real for us Muses. Yes, I am a Muse. I’m still a goddess… don’t get it twisted. But as a Muse we’re put upon to be inspiring as well as godly. They don’t just value us for our looks. We’re serious. We are well versed in arts and science. We are thick with knowledge and bearers of inspiration.

I’ve always had a tumultuous relationship with my dad. Zeus got it on with my mom for nine consecutive nights and she ended up her nine Muse children. Since she is the goddess of memory (Mnemosyne), she’s never let us forget what she went through. Especially since he basically ignored her and went back to dipping his nib in any other inkpot he could find. She suddenly had nine of us demanding all of her time and attention. Try dealing with that guilt forever. Apollo and Nymph Eufime stepped in to help mom out, so we grew up pretty solid even though she did always keep track of every little bad thing we said or did. I have a lot of fun with my sisters and think that we’ve got an amazing family. I have always kept a pretty low profile in the Greek world, but now I’m beginning to think that this new scenario is going to give me a chance to shine.

My claim to fame is that I am an astronomist. As in, I invented astronomy. Unfortunately everyone always confuses that with astrology, so no one ever takes me seriously. It is frustrating, but I’ve finally decided to embrace it. I’ve always been one to stargaze and dream, so I’m taking on some new challenges and working on a secret project for NASA. I am also doing a little side research with some interesting partners and developing some badass theories. As cover, I’m using my intuitive side and dabbling with astrology, energy healing, theTarot, and other magical things that are dismissed by most. Zeus gave me a sick penthouse with a rooftop patio, amazing skylight, and plenty of space to work out of. But I can’t let daddy know that I’m smarter than he is… old school misogyny and all.

We’ll see how this all works out. I’ve got pretty high aspirations, but I’ve been that way all along. I feel like the heavens and universe have got my back, so I might as well take the opportunity to see how far I can go. If dad doesn’t watch out, I might just be the one to knock him off his throne.