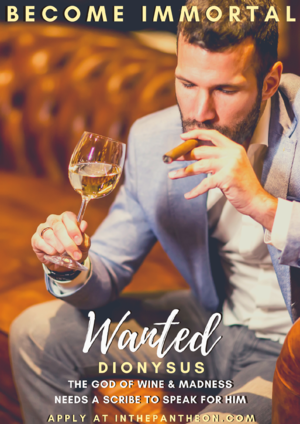 Hair Color: He is sometimes described as androgynous or effeminate with long, beautiful, dark, wavy or curly brown hair.

Facial Hair: Typically none. However, he may appear with what appears to be light scruff reminiscent of a young man.

Eyes: Violet, but may appear like Lapis to the casual observer.

Owner of the Mary Jane Bakery and Green Man Vineyards

Originally resided on Mount Olympus, but has now moved to his flat within the Olympus Administration Building. However, he can often be found couch surfing more than at his own place.

General Overview: Dionysus only wants to be alone when he’s hungover. He is a gregarious, friendly spirit usually surrounded by a retinue including devotees, sacred animals, and other deities. Dionysus is known for his lightheartedness and always offers his help to anyone in need. He is very popular among gods and mortals at social events. Nevertheless, Dionysus is many times misunderstood.

Shapeshifting. Dionysus typically manifests in the form of a man. However, he has the ability to shift into the forms of animals, such as a lion, bull, or goat. However, at parties, festivals or when working with plants, he often manifests as the horned Green Man, crowned with snakes.

Insanity. Dionysus is a lover not a fighter and prefers to not harm anyone directly. Instead, he strikes them temporarily insane so that they harm themselves, sometimes fatally.

Party Meister. Can make exquisite wines or other edibles rapidly from on-hand ingredients. These items never spoil, are never bitter, and are always of the highest quality.

Green Thumb. By channeling positive energy into a plants, they will grow very swiftly as though time were rapidly moving. These plants are immune to diseases, parasites, or other environmental factors. They always produce the highest quality plants. Unfortunately, Dionysus seems to only be able to affect (or only cares about) plants that will provide healing or intoxicating effects.

Normal Daily Wear: Dionysus’ daily wear appears as whatever is conducive to the activity he is engaging in farming, baking, et cetera. No matter the occasion, he always tends towards the most casual version of these appearances. He tends to wear hats with an ivy-leaf and snake motif.

Thyrsus. A wand (originally a fennel stalk) topped with a pinecone; also cymbals, frame drums, and other percussion instruments. In this new modern time, the thyrsus appears to be nothing more than a honey stirring stick. With this wand, any food or beverage can be sweetened to perfection. Spoiled or otherwise polluted items can be restored to their peak.

Dionysus’ Drinking Cup. A ceramic cup adorned with intricate artwork. When filled with an alcoholic beverage, it feels weightless in his hand and the liquid will not spill. When drinking from the cup, Dionysus feels more confident, care-free, wise and never tires.