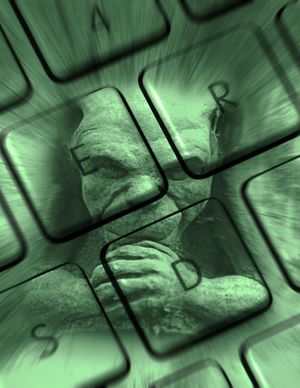 It’s not a bug – it’s an undocumented feature. Maybe, it’s a digital gremlin.

DeeGees exist only in computers, computer networks, and across the internet. digital gremlins are autonomous creatures that can travel from computer to computer when they attach themselves to data being transferred over the internet. This can be either through wired or wireless connections. In this way they can travel quickly around the world, in a very short amount of time. Once they breach a firewall and infect a computer or network they can slow processes, corrupt or delete data, and even crash entire systems.

Gremlins are extremely difficult to isolate due to the speed at which they travel on information packets. They usually appear in isolation and rarely will work in coordination with each other. One exception to this is if they are under the control of a sentient creature such as a tulpa or other stronger lifeform that inhabits computer networks. In these instances deegees can be harnessed to work as an electronic army to wreak havoc on any system. A group of them working together can bring down large computer networks and easily breach the most complex firewalls.

The origin of the first digital gremlin is unknown. It is believed they first started appearing as soon as computers were able to store data and retrieve it later. Their presence became known to mortals in 1971 after the invention of the “floppy-disk” which allowed unknowing users to transfer them from one computer to another. In such a way they began to spread. However it was not until the 1990 development of HTML and the introduction of the internet that gremlins truly began to proliferate.

While the process of how they morph from useless data fragments to sentient beings is unknown, it is clear that the presence of digital gremlins will breed more gremlins. Hence “nest” computers often have to be shutdown and have their data completely wiped or hard drives replaced in order to rid them of the problem.

Digital gremlins now exist, or can proliferate, any computer in the world. They travel attached to files and data as it is sent through cable, wi-fi, or satellite. In short, anywhere data is transferred digital gremlins can exist. In general they are quirky and annoying. Often they will lie dormant for long periods of time, only to cause and issue and return immediately to cyber hibernation.

They can slow or at times even shutdown computer systems, even major ones. Mortals blames things like malware, ransomware, and hackers for all sorts of computer issues. Truth be told it is often one or more digital gremlins at work.

A gremlin can be “captured” by isolating a computer physically from the internet by removing cords, cables, and wi-fi connections. This will trap the “wired imp” within the circuitry of the computer, but almost assuredly render the computer useless. It should be noted that capturing an imp, or group of imps, in this manner is difficult due to the speed at which they can travel with data transfers through routers and modems.