Artemis is the Goddess of the Moon and the Hunt, currently voiced by Rashmi Menon. 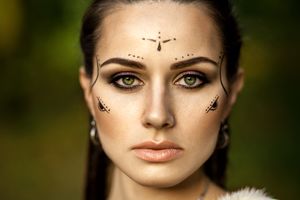 Get to Know Your Goddess

Distinguishing Features: Artemis is always equipped with her silver bow and quiver, and her silver blade in a sheath bound to her right thigh. Artemis has a dragon by the name Sayeh who is transformed into a support dog in the mortal world. Sayeh is always with Artemis. Always!

Siblings: Apollo and other children of Zeus

Artemis manages the Mount Olympus National Park. She also owns the Silver Bow Foundation that works towards two causes concurrently – wildlife preservation and Women and Children’s empowerment. She runs her foundation from her office on the 50th floor of the OA building mostly, along with her 3 favorite nymphs Hyale, Iphigenia, and Britomartis and the Satyrs – Iain and Jamie gifted to her by her aunt Hestia. Her mortal assistant Kara plays an important role in keeping everything running smoothly.

Artemis loves to roam the vast expanse of the Olympus National Park and prefers to stay in her temple in the caves behind the waterfall of the National Olympus Park. At other times, she spends time in her residence adjacent to her office on the 50th floor of the GC building.

General Overview: Artemis is proud and confident of her skills. She is competitive by nature and believes there is no equal to her in the art of archery and hunting. Artemis embodies the spirit and virtue in hunting, so despite the fact she hunts animals she also protects them, especially the young ones; this earned her the title Goddess of Animals. She is known for her temper and would not think twice before taking down anyone who dares to cross her.

Mortals and immortals are drawn to her beauty but Artemis believes she has a larger purpose in life. She takes her role as protector of women, and children seriously and places her work above everything else.

Likes: Nothing pleases Artemis more than a good hunt and a riding the wind on her dragon, Sayeh. She also loves dancing in the rain at the foothills of the mountains or deep in the woods with her band of nymphs. Animals keep her company and she loves spending time in the woods. She loves to practice Archery with her twin, Apollo, whom she lovingly calls, Mos.

Dislikes: Artemis is not a fan of large crowds and dislikes big cities. She prefers the music of nature to the constant thrum of the cities. She hates backstabbers, cheats, and those who hurt animals, women, or children.

Goddess of the Hunt, Wild & Creatures. As the Goddess of Hunt, Artemis is an excellent hunter with impeccable marksmanship with not only her bow and arrow, but also a wide range of weapons. Her personal favorite after her bow and arrow is the silver blade that was forged by Hephaestus and gifted to her by Zeus. She is also an excellent tracker who uses her tracking abilities to hunt down mortals and immortals alike. As the Goddess of Wild/Creatures, Artemis can make any non-magical creature do her bidding and can speak to magical creatures telepathically, though not control them.

Transmogrification. Artemis has the ability to focus her energies to alter the appearance and core essence of other living creatures. She transforms her dragon, Sayeh, to appear as a support dog when traveling in the mortal world. She also has the ability to transform mortals into animals or other mortals. Though Artemis has developed her abilities to utilize this ability regularly, using this power on a large scale can drain her, causing headaches and an inability to perform transmogrification again until the symptoms dissipate. During this time, she will be weakened, making her an easier target.

Advanced Telepathy. Artemis is capable of telepathic communications with mortals and animals. This allows her to read their minds and respond to them without having to use words. Telepathy with animals is fluid and seamless. Telepathy with mortals and magical creatures is more difficult due to their higher ordered thinking, and mortals and magical creatures can choose to shut out the telepathic communication coming through. This ability does not apply to other immortals.

Hunter’s Mark. Artemis can “mark” her prey with a piece of her energy, allowing her to hone in on that immortal, mortal, or creature anywhere in the world. She can also tell if the Marked is alive or dead through the link. She can only apply this mark to three mortals/creatures (any mix of these) at a time. This tracking applies to the physical world primarily and her ability to hone in on the signal weakens if the Marked passes into another realm other than the Mortal Plane.

Healing Touch. As twin sister, to the God of Healing, Apollo, Artemis has the ability to heal and aid mortals and animals who are physically wounded or affected by disease (healing Immortals is outside her sphere and falls to her twin brother). Sometimes this is healing the injury/illness, while at other times, it is used to aid a swift and peaceful passing so that the natural order may continue. Because healers can heal as well as kill, Artemis has sometimes been known to cause disease to mortals who have incurred her wrath.

Temperamental – Artemis is known to have a temper and to act on her temper before stopping to think. Combined with her impulsivity, she has a tendency to strike first and think later, which often lands her in a soup.

Impulsive – As a goddess of the wilds, Artemis has an impulsive streak. She will often act quickly, based on what she thinks is the right thing to do at the time, without waiting for all the information. Sometimes, this goes well. And sometimes…

Protectress – Artemis loves her family, especially her twin, Apollo, and her father, Zeus. She cares deeply about her family and will go to any lengths to protect them from harm, even if it means putting herself at risk. In any difficult choice that involves family, the answer is always Family.

Normal Daily Wear: In Olympus, Artemis is normally seen wearing her white sleeveless silk dress with a golden headband. She carries her quiver filled with arrows and her bow across her shoulders. Her golden waistband holds a sheath that protects her beloved silver blade.

Alternate Dress Wear – In the mortal world due to the nature of her job Artemis is seen wearing a black fitted jumpsuit with several pockets for her Glock. The Silver blade housed in its sheath is bound to her right thigh using a leather belt.

Quiver with Arrows and Bow – Artemis’ quiver and bow have the magical ability to become invisible in the mortal world, the arrows in her quiver are neverending and reload as and when required. It is only visible to immortal eyes. A mortal will be able to see her in her true form only if she so wishes.

Artemis, the daughter of Zeus and Leto, and the twin sister of Apollo is the goddess of the hunt, wild animals and vegetation, and of chastity and childbirth. Among the rural populace, Artemis is the favorite goddess. Artemis embodied the sportsman’s ideal, so despite the killing game she also protected her subjects, especially the young; keeping in significance to the title Goddess of Animals. The Goddess of wild nature loved to dance, usually accompanied by nymphs, in mountains, forests, and marshes.

She was the patron and protector of young girls and was believed to bring disease upon women and relieve them of it. Artemis was worshipped as one of the primary goddesses of childbirth and midwifery along with Eileithyia. Much like Athena and Hestia, Artemis preferred to remain a maiden and is sworn never to marry. Though Artemis was a virgin, she drew the attention and interest of many Gods and men. However, it was only her hunting companion, Orion, that won her heart. It is believed that Orion was killed by Artemis herself for daring to cross her.

Artemis was one of the most widely venerated of the Ancient Greek deities and her temple at Ephesus was one of the Seven Wonders of the Ancient World. Artemis’ symbols included a bow and arrow, a quiver and hunting knives. The deer and the cypress were sacred to her. Poets and artists usually pictured her with her stag or her hunting dog.

In the retelling of the Pantheon in a modern world, we have tried to remain true to Artemis’ history as much as possible, however, the writer has and will continue to use creative license as and when deemed necessary.[1]

χαίρετε my dear mortals! It is I – your friendly shape-shifting Goddess of Hunt. You know me as the Pure, Pristine, Virgin (that wasn’t easy!) Goddess of Hunt. What you may not know is that I’m much more than that! All things Nature and Wild belong to me and that makes me the Mother of Creatures – Yes, Dragons included!

As the favorite Goddess of the rural populace and a friend of the mortals, I demand your utmost fealty. I can be fiercely protective and loyal towards my subjects and those whom I love. Believe me, it is a good thing! Have your doubts? Why don’t you have a word with my mother Leto and my brother Apollo, who I helped deliver when I was merely a 9-days old baby. My father, Zeus, dotes on this daughter much to Hera’s chagrin.

After witnessing the numerous mistakes of my Father (don’t ask me which ones), I convinced him to grant my wishes to remain forever chaste, unmarried and always equipped for hunting. This is how I came into possession of the most gorgeous silver bow and arrow along with my band of nymphs. I am rarely seen without my beloved weapon that I never shy from using. If my tremendous reputation for marksmanship is anything to go by, you will be careful enough to NEVER cross me.

I may even throw a spell or two your way. Don’t blame me if you wake up as a little ferret or rodent instead of your mortal self as a result of your disobedience. I know I know that is awfully rancorous and impulsive of me. What can I say? I am an Impulsive Cookie (Didn’t get the reference? Take a look at my Twitter Handle mentioned in the footnotes). Before you go writing me off as a cold, vengeful, and unforgiving Goddess, let me tell you that I do have a lenient loving side.

I am an independent spirit who enjoys wandering through the woods along with my band of nymphs. When I love I do it with the intensity of a thousand burning suns and moons. I will fight everything that lives and breathes in this universe to protect the innocent and those who have joined me in keeping the sacred vow.

Believe me when I say that it is not a wonder that I am one of the twelve in Olympus. In time, I will share the stories that speak of all of my trials, tribulations, victories, and failures. Stories that speak of courage, loyalty, vengeance, heartbreak, love, ferocity, and power! Join me on this mythical journey, won’t you?